West Indies did manage to strike early when Roston Chase removed Shan Masood for 9, but Azhar and Azam ensured that they did not get out cheaply.

Pakistan were in a commanding position at the end of Day One of the third Test against West Indies at 169 for 2, at Roseau, Dominica. Azhar Ali has played magnificently for his unbeaten 85. His partnership of 120 with Babar Azam for the second wicket was the catalyst for Pakistan finishing with a healthy score, despite an entire session being washed away due to rain. West Indies did manage to strike early when Roston Chase removed Shan Masood for 9, but Azhar and Azam ensured that they did not get out cheaply. Azam was dismissed for 55, which brought Younis Khan to the crease. He was rightly welcomed to the crease with a guard of honour by the West Indies cricketers. FULL CRICKET SCORECARD: Pakistan vs West Indies 2017, 3rd Test at Windsor Park, Roseau, Dominica

An entire session was washed out due to rain and the extended final session too was cut short due to bad light. There are showers expected on Day Two as well. Day Two is scheduled to begin 30 minutes before schedule to make up for the lost overs, but the contest might fall a few overs short due to rain once again. Only 69 overs were bowled on Day One and the fate could be similar on the second day.

West Indies did have a chance to get the wicket of Azam earlier. But wicketkeeper Shane Dowrich dropped a catch when Azam was on 28, off leg-spinner Devendra Bishoo. But he rode his luck and got to his fourth Test fifty. However, Azhar continued with his patient innings and has a good chance to register yet another ton. He has Younis at the other end, who is unbeaten on 11. Pakistan still have the likes of Misbah-ul-Haq, Asad Shafiq and Sarfraz Ahmed to follow.

With a strong platform laid, Pakistan have a chance of getting a big score on the board. Pakistan will look to continue from where they left off on Day One.

West Indies won the toss and elected to bowl first on Day One. West Indies went into this Test with an unchanged side. Pakistan, on the other hand, have handed a Test debut to fast bowler Hasan Ali, who replaces leg-spinner Shadab Khan. Also, Masood comes into the XI in place of Ahmed Shehzad, who is ill. The three-match series is level at 1-1. Pakistan won the first Test at Jamaica by 7 wickets, but the hosts bounced back extremely well in the second Test at Barbados, winning it by 106 runs. If Pakistan go on to win this match, this will be the first series win for them in the Caribbean. 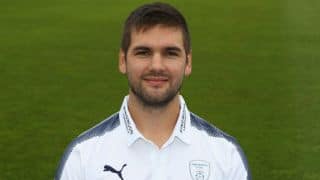