Kraigg Brathwaite and Devendra Bishoo's 50-run stand keep West Indies ahead in the race in final Test at Sharjah.

West Indies were in complete command of first session of Day 3 with Kraigg Brathwaite’s century building strong lead of 33 runs on Tuesday at Sharjah Cricket Stadium in Sharjah. Mohammad Aamer once again had his day when he grabbed the spotlight for a while with a wicket and has figures of 3 for 71 after grabbing the skipper Jason Holder. Devendra Bishoo and Brathwaite put up steady partnership of 50 runs to keep West Indies very much in the game. Bishoo was caught by Azhar Ali when he was playing at 17, however, with the ball slyly touching the helmet, umpire Michael Gough reversed the decision and was declared safe. Pakistan need three more wickets to bail out West Indies while the latter will need their patient batsman Brathwaite to build a bigger lead on board along with Bishoo on the side, keeping wickets intact. LIVE CRICKET SCORECARD: Pakistan vs West Indies, 2nd Test at Abu Dhabi

Brathwaite was surging to his century with a boundary on Aamer’s first over for the day followed by two runs to reach his 5th Test century. However, it was Aamer’s day once again as he got the first wicket with the new ball and nicked Holder for 15. Bishoo entered at No. 8 and complemented Brathwaite well as they built yet another healthy partnership for eighth wicket. Yasir also tried his luck with the new ball but found no luck and was hit by niggle, forcing him to step out for a while. By the 89th over, West Indies leveled the score with Pakistan and in the next over took lead by 2 runs. At the time of drinks, West Indies built up a good 44 runs on board with loss of a wicket. Mohammad Nawaz was finally given the ball after being misused for just three overs.

Just for information, Nawaz will also be touring New Zealand. Once again a stance was witnessed similar to that of when KL Rahul took a catch that unfortunately hit the helmet during New Zealand series, was found when Azhar Ali also caught Bishoo and Nawaz appealed to the umpire that was declared out. However, the decision was reversed and Bishoo was safe. West Indies soon reached the 300-run mark to push the lead further. Aamer was back into attack to bring some bowling variations, but was seen giving way too many extras. However, Brathwaite and Bishoo found steadiness and enjoyed the free runs coming their way. The first session saw total of 70 runs building for West Indies.

On Day 2, Brathwaite needed 5 more runs to secure his century and remained unbeaten on 95 on Monday at Sharjah. Brathwaite’s patient innings kept West Indies in command throughout their innings. West Indies were struggling at 38 for 3 and he put up healthy partnership 83 runs with Roston Chase and 50 with Shane Dowrich for fifth and sixth wicket respectively. Holder ended his innings at 6 at the end of the day. West Indies were in good position and can avert 3-0 whitewash after losing the first Test by 56 runs in Dubai and 133 runs in second Test. Brathwaite batted solidly as he negotiated Pakistan’s spin-cum-pace attack with full confidence, having so far hit ten boundaries. ALSO READ: Mohammad Aamer: Looking forward to Pakistan s tour of New Zealand and Australia

West Indies lost Jermaine Blackwood for 23 soon after lunch and it looked like they would once again concede a lead but Brathwaite held the innings well with Chase and Dowrich. Chase hit leg-spinner Yasir Shah for a straight six to bring up his fifty but was caught in the slip off Aaamer in the next over. Dowrich then complimented Brathwaite as they took West Indies to 234, with Dowrich benefitting from a catch off Wahab Riaz’s no ball on 15 and a let-off by Younis Khan on 21. Dowrich was finally bowled by Riaz from an inside edge.

West Indies were struggling when they lost the key wicket of Darren Bravo for 11 before lunch. Bravo miscued a drive off a flighted ball from spinner Zulfiqar Babar and was smartly snapped up by a diving Aamer at extra cover, his first catch in 20 Tests. He also went past the record of Geoff Puller of securing his first Test catch in 17th match. Aamer had no catch in his first 19 Tests, most matches without a catch for a player from the start of his career. West Indies got off to a disastrous start, with opener Leon Johnson trapped leg-before by Riaz in the fourth over for just one.

Bravo, who made a fighting hundred in the first Test, was left frustrated by short-pitched deliveries from Riaz and Amir before getting out. Marlon Samuels also did not last long, trapped leg-before by leg-spinner Yasir without scoring to leave West Indies struggling on 38-3. On Day 1, Shannon Gabriel and Bishoo shared seven wicket haul and on Day 2, Alzzari Joseph added further fuel to the fire as he bagged two wickets to bowl out Pakistan for 281. Pakistan s Aamer and Yasir went strong early on Day 2 with some useful boundaries co,ing from Aamer, however, he was bowled by an inside edge from Joseph and in similar fashion Yasir was picked for 12. 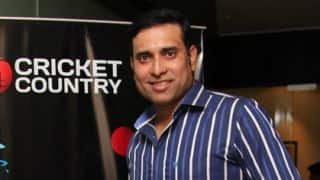 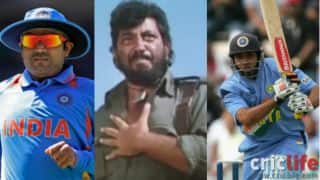