Pakistan vs West Indies 3rd Test, Day 4, preview and predictions: Can Jason Holder and co. upset the No. 2

Will Pakistan bat on and put a safe total on the scoreboard or West Indies dismantle their lower-middle order and end the series on a winning note, is a question only time will tell.

West Indies and success have not been getting along off late, especially in Test cricket. In fact, their dominance in the format has long gone. For that matter, the tales of the 70s and 80s is all they have to brag about. Gone are the days when a West Indian batsman scored a quadruple century or a bowler ratted the opposition with lethal bouncers. It is nothing new. We often talk about it these days. However, we do want them to carry their T20 charm in the longest format, for their cricket has been in turmoil for the past few years and we, as cricket-lovers, would want to see them emerge triumphant in whites. LIVE CRICKET SCORECARD: Pakistan vs West Indies, 3rd Test at Sharjah

West Indies were on the verge of pulling off the improbable in the first Test against Pakistan beating them in UAE. Let us not forget that only New Zealand could edge them out in the past half a decade. No other team could do it; not even Australia or England. Well, India have not played a Test against Pakistan since 2008. But let us not disregard the fact that Pakistan would have got the better of them as well, in UAE. All the same, in the third Test at Sharjah, West Indies are likely to thump the No. 2 team in ICC Test rankings.

Pakistan are four down. They lead by 41 runs. In the middle are Azhar Ali and Sarfraz Ahmed. But how much do Pakistan need to score to whitewash West Indies?

Both Pakistan and West Indies are fallible and erratic. Both fall at the doorstep of defeat in a session’s time (even England did the same against Bangladesh earlier this week). The wickets cascade down, like a house of cards (in the words of the great Navjot Sing Sidhu).

It is Pakistan-West Indies series. There has to be more equations.

What if West Indies go all guns blazing (barring Kraigg Brathwaite, for apparent reasons) and chase down the target on final day? Possible, right?

I know the headline says predictions, but we have already entered the complicated world of permutations and combinations. Well, let us not head back now.

Another possibility is Pakistan throwing away their wickets cheaply in the first two sessions, setting up a small target. And the West Indies chase it down with ease.

But again, it is Pakistan-West Indies series. What if West Indies fail to chase down the paltry total?

Now that I have confused you with predictions, let us walk through the preview.

The track is difficult to define. At times it acts slow. It offers nothing for the pacers. And then there are times when a bowler such as Jason Holder dismisses the likes of Sami Aslam, Asad Shafiq and Younis Khan. The first two fell pray to the bouncers. I mean, let us not forget that Holder’s height read 6 feet 5 inches, which means the ball comes down from 10 feet at least. With that height, one does not even need to have ferocious pace.

Again, the track that appears slow provides venom for the pacers, for the short-pitched deliveries become unplayable.

Third to go was Younis. He nicked it down the leg-side. They call such dismissals unlucky these days, but Younis had completely lost his balance, as the ball jabbed back in late.

Pakistan, by then, were under fire. West Indies, for the first time this series, had an upper hand.

In came Misbah-ul-Haq the man who rarely loses his cool and plays a false shot. Let us not forget he is just human; and to err is human, for he pulled Roston Chase’s short delivery in the hands of Devendra Bishoo at deep backward-square-leg.

At times it is okay for the greatest of the greats to commit a mistake (I know I am being biased, but it is our very own Misbah).

Moving on, the triple-centurion Azhar Ali rose to the occasion and steadied Pakistan’s sinking ship. Along with Sarfraz, he added 38 runs for the fifth wicket at a crucial juncture.

As the game progressed, we witnessed more rough patches on the track. And for that to exploit, West Indies have leg-spinner Bishoo, who took a stunning four-for in the first innings. In addition, off-spinner Roston Chase has been more on the economical side.

All in all, Day Four promises to produce some quality cricket. Will Pakistan bat on and put a safe total on the scoreboard or West Indies dismantle the lower-middle order and end the series on a winning note, is a question only time will tell. 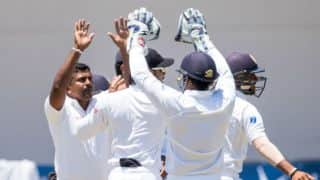 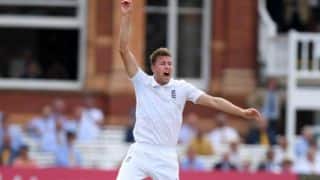