The live telecast and live streaming of the match will be available on tensports.com and Ten HD 1, Ten 1.

Holder dismissed the likes of Sami Aslam, Asad Shafiq and Younis Khan. At close Pakistan were struggling at 87 for 4 with opener Azhar Ali 45 not out and Sarfraz Ahmed 19 not out, leading only by 31 runs with six wickets intact and two days to play. Pakistan needed a big effort after conceding a 56-run lead but from 37 for 0 they lost four wickets in the space of 11 runs with Holder firing on all cylinders and their batsmen playing rash shots.

An over later Holder had Younis Khan caught behind for zero and from the other end Misbah-ul-Haq holed out off spinner Roston Chase for four. West Indian paceman Shannon Gabriel had Ahmed caught in the slip for 9 only to see the umpire calling a no-ball, allowing the stand to reach 39 by close.

If West Indies pull off a win, it will be their first in 13 Tests since beating England at home in May last year, while Pakistan will spoil a good chance of a 3-0 whitewash after winning the first two Tests in Dubai and Abu Dhabi. 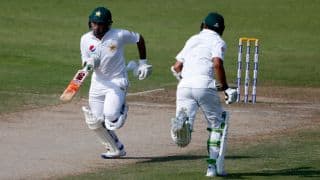