Thisara Perera, who claimed 2 wickets, slammed a 19-ball 47 not out to guide World XI side to a 7-wicket victory.

The carnival at Lahore that began on Tuesday continued on Wednesday as well. The Pakistani crowd that has been bereft of home action were up for a treat yet again. Thisara Perera’s brilliant all-round performance sealed it for ICC World XI, against Pakistan in the second T20I of the Independence Cup. The series is now tied 1-1 with the final game to be played at Lahore on Friday. Perera, who claimed 2 wickets, slammed a 19-ball 47 not out to guide his side to a 7-wicket victory. ALSO READ: Rejoice return of cricket in PAK with statistical highlights from first 2 T20Is

World XI chased down 175 in 19.5 overs. Perera struck 5 sixes and shared an unbeaten 69-run stand from just 35 balls. Hashim Amla’s 55-ball 72 not out was the apt stabiliser that World XI needed.

It is an honour to be selected for the World XI side, it was my dream. Hash (Amla) told me to stay until the end so that we could cash in. Normally I play similarly in situations for my country as well and this (finishing off games) has become a habit now. Thanks to the Pakistani fans, they really cheered well for us, said Perera after he was awarded the Man of the Match.

World XI captain Faf du Plessis was in all praise for his South African teammate Amla and now hopes to carry forward the momentum.

We needed it to keep the cup alive. I thought we bowled much better and kept them to a lower score. You always need someone to ensure that we do not collapse; quite the one we did not have yesterday. That s what Amla did, he was steady and took us through. Last night we were disappointed that we did not do well but am glad that we came back strong. I expect the third match to be in similar conditions and hope to continue the form, said du Plessis.

Consistency has always hurt Pakistan. They were not good in the field and Shoaib Malik dropped a simple chance of Perera. Also, barring Imad Wasim all bowlers leaked runs. There were far too many full-tosses bowled.

Acknowledging World XI’s efforts, Pakistan skipper Sarfraz Ahmed said, We have to give credit to the World XI. Hashim-bhai played beautifully. This is a learning opportunity for all of us, it will teach the bowlers how to bowl in tough situations to class players like Hash.

At the same time, Sarfraz was critical of his side’s bowling and fielding.

We were a bit sloppy in the field and that cost us. Had the execution been better, we could have won this match. You should also have a slower length ball in your kitty apart from the yorkers, told Sarfraz referring to the plethora of full-tosses bowled. 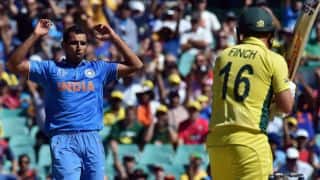