With the Pakistan versus World XI T20I series already underway, England‘s representative from the touring side and former skipper Paul Collingwood compared cricket in the subcontinent to religion. Collingwood had missed the series opener as Faf du Plessis and the think tank went ahead with Grant Elliott. However, he is optimistic of contributing in the remaining matches. Collingwood also believes that World XI have it in them to bounce back and win the series after the 20-run defeat in the first T20I at Lahore.

Collingwood spoke about the feeling after the grand reception given to players from both sides ahead of the tournament opener. He said that he “felt like a kid at Christmas. I’m 41 years old and to actually have the feeling of being in a Twenty20 International again is something I am very excited about.”

Collingwood also recalled his fond memories of playing in Pakistan and added, “The last time I came to Pakistan I understood that cricket in Pakistan is a religion. The passion and the atmosphere that you create in the ground is something special. I experienced that certainly in Karachi in 2005 and certainly tonight was a great start to, hopefully, a series that we can still win. So I am very much looking forward to playing in the game.”

Collingwood’s last international game was an ODI against Bangladesh, back in March 2011. He asserted that he is excited and little anxious of his international comeback. “I am very proud, I can tell you right now. I came out of the net session yesterday and it felt like I was playing international cricket again. That, to me, when I retired back in 2011 and to have that same feeling again, that anxiety and that intensity and all those things when you play for your country and they all come back again, so I am very excited about playing.”

After the drubbing received by World XI in the inaugural T20I, Collingwood affirmed that the players will need time to adjust to conditions, but can surely keep the series alive. “You know, when a World XI comes together, it takes some time to know each other and certainly Faf understands the players’ role in the team, what kind of tactics he is going to use when players are coming on to bowl. It’s not to going to gel immediately, so hopefully after today’s game we will take a little bit of information out of the game and we can use that in the next game to have a better performance.” 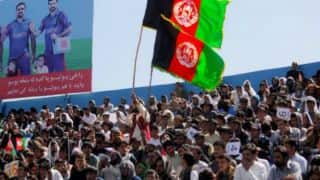