Pakistan will win the series if they win this match.

Pakistan will take on Zimbabwe in the second One-Day International (ODI) at Lahore in bid to win and seal the three-match series. Coming on the back of a 2-0 win in the preceding T20I series, Pakistan looked dominant throughout the first ODI though Zimbabwe did not let off without a fight. LIVE UPDATES: Pakistan vs Zimbabwe 2015, 2nd ODI at Lahore

On a rather harmless and flat surface, the Pakistani bowlers feasted by scoring 375 in their quota of fifty overs with Shoaib Malik being the top-scorer and only centurion. Zimbabwe’s response was tough but inadequate. Riding on skipper Elton Chigumbura‘s century, Zimbabwe got to 334 for seven in their fifty overs. To win this match, Zimbabwe’s bowlers will have to step up. Live Scorecard: Pakistan vs Zimbabwe 2015, 2nd ODI at Lahore

Catch the live telecast of the Pakistan (PAK) vs Zimbabwe (ZIM) second ODI match at in Lahore, on PTV Sports in Pakistan.

However, there is a downside to this too. Often there are malignant websites disguised under the veil of free live streaming, but will only infect your devices with bugs and viruses. In more grave cases, it could be used to spy on the user or steal information from devices. Be smart when visiting live streaming websites, use only authentic sources for the service. 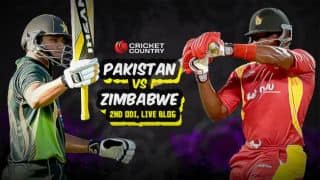