Pakistan remain unbeaten in the shorter formats versus Sri Lanka by virtue of this victory.

Pakistan welcomed cricket with an impressive 36-run victory over Sri Lanka in the third and final T20I at Lahore. After posting a giving away 180 in 20 overs, Sri Lanka needed more from their batsmen. Shoaib Malik’s 51 provided the much-needed impetus to Pakistan’s total.By virtue of this performance, Pakistan maintain their unbeaten streak versus the opponents in the shorter formats. On the other hand, this is Sri Lanka’s 15th defeat in limited-overs.

In pursuit of 181, Sri Lanka lost wickets in cluster. Their top-order failed for the third time in a row. Mohammad Aamer struck in the second ball, as Dilshan Munaweera went for 1. They were soon reduced to 21 for 3, with Mohammad Hafeez and Imad Wasim chipping in. Dasun Shanaka played a counter-attacking innings. Striking at 150, he kept his side in the hunt and went against the run of play.

Fahim Ashraf, who became the first Pakistani to claim a T20I hat-trick on Friday, removed Shanaka and sealed the deal for hosts. In the end, there were some contributions from de Silva and Seekkuge Prasanna, but victory evaded them long back. Aamer returned with figures of 4 for 13 in his first game at home.

Earlier, opting to bowl, Sri Lanka failed to churn out regular breakthroughs. A 57-run opening stand by Fakhar Zaman and Umar Amin took Pakistan to a good platform. There were dry overs in between with Munaweera and skipper Thisara Perera keeping things tight. However, Malik’s late blitz and Vikum Sanjaya’s expensive 23-run last over tilted equation towards hosts. 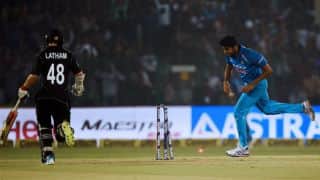 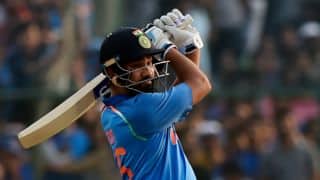 Rohit Sharma: Have to be at your best to perform well against New Zealand