The Pakistani Taliban on Thursday said they had not threatened to kill cricketer-turned-politician Imran Khan if he holds a march to Waziristan, and blamed a Western news agency for falsely reporting the threat. 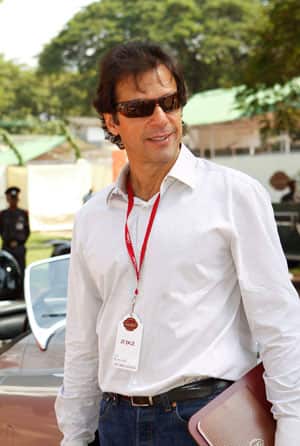 The Pakistani Taliban on Thursday said they had not threatened to kill cricketer-turned-politician Imran Khan if he holds a march to Waziristan, and blamed a Western news agency for falsely reporting the threat.

While denying the report, the Taliban made it clear they had no love for Khan, whom they view as a “liberal”.

Tehrik-e-Taliban Pakistan spokesman Ihsanullah Ihsan said a militant ‘shura’ (council) will decide on a response to the march planned by Khan’s Pakistan Tehrik-e-Insaf party only a week before it reaches the tribal areas.

In a statement emailed to the media, Ihsan claimed a reporter of a Western news agency had interviewed him and then “added the death threat himself while bypassing the norms of journalism”.

He further said: “I hadn’t stated in that interview that we are going to kill Imran Khan… We condemn such behaviour by media personnel that they (misrepresent) our stance”.

Khan has said he plans to lead thousands of people in a march to Waziristan in September to protest against the drone strikes.

The Pakistan Tehrik-e-Insaf party chief has been among the most outspoken critics of the CIA-run drone campaign, which the Pakistan government says is counterproductive and a violation of the country’s sovereignty.

However, the Taliban spokesman made it clear that his organisation has no sympathy for Khan.

“It’s… clear that we don’t have any sympathy (for) Imran Khan, neither we need his sympathy, as he himself claims to be liberal and we see liberals as infidels,” Ihsan said.

Yesterday’s reported threat from the Taliban had come as a surprise to those in Pakistan who have criticised Khan for not being tough enough on the militants.

Some of Khan’s critics have nicknamed him “Taliban Khan” because of his conservative views and his ties with hardliners like Jamaat-ud-Dawah leaders. (PTI)

Sri Lanka Premier League to be telecast in 80 countries