Azhar has struggled to cement his place in the limited-overs side – his last appearance coming against New Zealand earlier this year.

Pakistan batsman Azhar Ali has announced his retirement from ODI cricket. The 33-year-old, who made his debut against Ireland in 2011, played 53 one-day internationals for Pakistan during which he scored 1845 runs. While he remains a constant in Test matches, Azhar has struggled to cement his place in the limited-overs side – his last appearance coming against New Zealand earlier this year.

Azhar captained Pakistan after the 2015 World Cup and remained in charge till the start of 2017. But under him the team sunk to No. 9 in the ICC ODI rankings with 12 wins and 18 losses. He was eventually replaced by Sarfraz Ahmed. Azhar, during a press conference in Lahore, pointed out that he was stepping away to give chance to deserving youngsters.

“I haven’t taken this decision suddenly, I have been thinking about it,” Azhar said. “It’s the right time to focus on Tests. There have been terrific players in one-dayers in the Pakistan set-up. I want to concentrate on Tests with the same fitness and energy that I have been.

“I didn’t decide to retire after any hard feelings, it’s my personal decision. I want to focus on Tests with full energy and improve my career record there. I don’t have any regrets because I always gave all my efforts.

“As a former captain, I wish the team very best for an important season ahead before the World Cup next year. I fully support Sarfraz [Ahmed]. He has been leading them very well.” 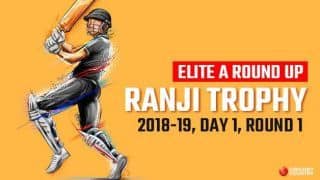