Rameez Raja has said that Inzamam-ul-Haq-led selection committee could have chosen a better 17-member Test squad for Pakistan to face England.

Karachi: Questioning Pakistan team’s selection for the upcoming England tour, former skipper Rameez Raja has said that the newly-appointed Inzamam-ul-Haq-led selection committee could have chosen a better 17-member Test squad to face Alastair Cook’s side. Uncapped batsman Iftikhar Ahmad was chosen in the national squad at the expense of Babar Azam, who was instead named the skipper of Pakistan A. The 53-year-old insisted that Azam has established himself as a player and that he deserved a chance to be called in the squad. Aamer clears one of many hurdles en route England

Azam suggested that selection should be made based on the overall performance rather than just on the previous records,the Express Tribubne reported. Meanwhile, Fawad Alam, who has been performing well in domestic cricket in recent times, was also ignored despite proving his fitness in the boot camp. Pakistan are scheduled to play four Tests, five ODIs and one-off T20 international against England from July to September. Will Mishab and co. reclaim honour for PAK in ENG?

Pakistan have announced their 17-man Test squad for the upcoming tour to England, with Misbah-ul-Haq leading the team. The teams for the ODI’s and T20I’s will be announced later. Mohammad Amir has also been selected in the squad, marking his first Test assignment after he returned back from international suspension. Pakistan will play four Test’s, 5 ODI’s and a solitary T20I in what will be Mickey Arthur’s first tour as the team’s coach. Arthur came in for Waqar Younis, after the latter stepped down from his post following poor displays from the team in the Asia Cup 2016 and ICC T20 World Cup 2016. 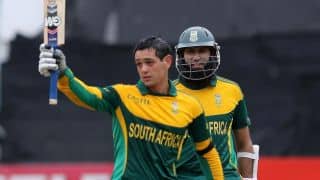