Opting to bat first, MP were off to a poor start with Naman Ojha departing fora  five-bal duck to Manpreet Gony followed by the wicket of skipper Rajat Patidar for nine, again claimed by Gony.

MP slumped to 47/3 when Baltej Singh removed Anshul Tripathi for 14, but Sahani and Bhandari put on a big stand of 110 runs in just 10.2 overs. During his knock Sahani hit seven fours and five sixes while Bhandari collected four fours and three sixes. Venkatesh Iyer then powered MP to 199/4 with a 9-ball 20-run knock.

In chase, Punajb lost both their openers – Anmolpreet Singh (6) and Simran Singh (0) – cheaply. Avesh Khan accounted for Anmolpreet while Pandey claimed Simran. The big wicket of Yuvraj Singh was taken by Iyer for 6 as Punjab found themselves tottering at 47/3 in 6.4 overs. Gurkeerat Singh and Mandeep then revived Punjab with a stand of 63 runs for the fourth wicket, but Gurkeerat’s departure in the 14th over put MP ahead. Gurkeerat’s was removed by Mihir Hirwani for 46.

Iyer then removed Barinder Sran for 11 while Pandey added two more wickets to his tally with the wickets of Sharad Lumba (19) and Baltej (4), while Mandeep was run out by Sohraab Dhaliwal. Punjab could only manage 165/9, losing the match by 34 runs. 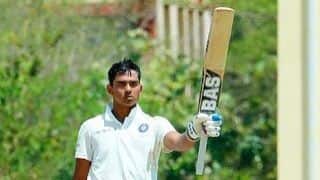 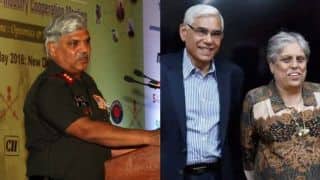