Mumbai Indians (MI) got off to a decent start against Rajasthan Royals (RR) in the eighth edition of the Indian Premier League (IPL) at the Sardar Patel Stadium, Motera, in Ahmedabad on Tuesday. Parthiv Patel was dismissed by Dhaval Kulkarni as he tried to get going with a slash over covers.  But he could only find Chris Morris at mid off for a simple catch. He was dismissed for 16(11). Just an over before that Aaron Finch had to go off as he pulled up his hamstring trying to stretch for a single in the just the fourth over of the game. Unmukt Chand came out to bat in place of him. Live Blog: Rajasthan Royals vs Mumbai Indians

Earlier, Mumbai Indians won the toss and elected to bat first. Harbhajan Singh misses out due to a sore neck. Shreyas Gopal made way for him. Ambati Rayudu and Aditya Tare missed out for Unmukt Chand and Parthiv Patel. Rajasthan Royals were unchanged from their previous game.  Live Scorecard: Rajasthan Royals vs Mumbai Indians 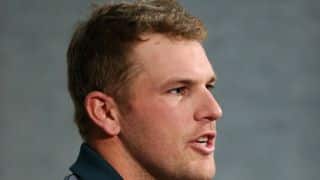 Shoaib Malik proud of Sania Mirza; says her achievement matter of pride for Pakistan too