Parvez Rasool says his team's historic feat of reaching the quarter-finals of the Ranji Trophy was a "special one."

He has led from the front when it mattered the most and Jammu and Kashmir skipper Parvez Rasool says his team’s historic feat of reaching the quarter-finals of the Ranji Trophy was a “special one” and will motivate the players more.

“I can’t explain you my feeling at the moment. We are among the top eight states in Ranji Trophy. The boys are just itching to meet Punjab and let me tell you that we are not scared of any opponents although they have Yuvraj Singh and Harbhajan Singh in their ranks. We are ready for a fight, (sic)” Rasool told PTI over phone from Agartala.

For Rasool, the qualification for the quarter-final and the fact that they will be playing in ‘B’ group was a “matter of pride”.

“This performance promotes us to B group next year in which we will be locking horns with the teams which were in ‘Elite’ group earlier. This means that we would need to work even harder as a team. From here, the challenge to elevate ourselves to the next level starts,” says Jammu and Kashmir’s first international cricketer.

Rasool played a stellar role in Jammu and Kashmir’s qualification as he first scored 83 to get the first innings lead and then ran through the Tripura line-up to take seven wickets which ensured that they enjoyed a better run quotient of (+1.006) than third placed Goa (+1.005).

“As a captain, it is my duty to perform in crunch situation. I am happy that I could peak at the right time, (sic)” said 24-year-old Rasool, who has taken 21 wickets and scored 550 runs in the current season.

For Rasool, the team has some quality players, who need more exposure at the top level as they have the ingredients to get better.

“This is a team which thrived on enjoying each other’s performance. I have got a taste of top level cricket by playing for India A and IPL and sharing the Indian dressing room. We have players like Adil (Rishi), Hardeep (Singh) and Bandeep (Singh), who have all done well. The pacers Samiullah Beigh and Mohammed Mudhasir have bowled their hearts out,” the skipper said.

“Considering other state associations, we don’t even get 15 percent of those facilities. This speaks of the volumes of determination that these boys have showed in reaching this level. The quality of cricket at the First-Class level has gone up and to measure up you need the best infrastructure,” Rasool explained.

“You know, we haven’t got any match fees for the last two years. But none of the players have ever complained although cricket is our livelihood. I believe this is the dedication, determination and discipline that has made us believe that we can beat any team,” Rasool concluded. 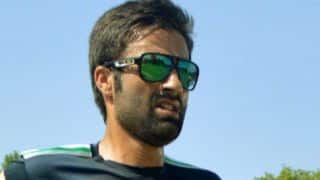 Umar Gul to return to Pakistan for further rehab