Parvinder Awana was on Friday beaten up by a group of five unknown people in Greater Noida.

While the Indian pace brigade has been the talk in the cricket fraternity, the pacers have not been having a good time in the country otherwise. In a span of week, we saw Mohammed Shami get into argument with local goons, Umesh Yadav s house burgled and now Parvinder Awana was on Friday beaten up by a group of 5 unknown people in Greater Noida. It is reported that Awana was returning from Haridwar and while passing Greater Noida, a group of unknown people, who were travelling by car along with a girl, attacked him. READ MORE: Umesh Yadav s house burgled

The group of people, who was running away after having a fight in ice factory, thought that Awana was chasing them and, therefore, they overtook his car before assaulting the cricketer. Awana’s Mahindra XUV has been damaged.

The five goons reportedly belong to Ghanghola village of Greater Noida. The state police have started investigation into the assault. Police are not ruling out the involvement of the Sunder Bhati Gang. A report from Indian Express quotes the SHO as saying, We are in the process of identifying the accused. An FIR under charges pertaining to assault has been lodged in the case against five unknown persons on the basis of the complaint we have received.

This is not the first time when Awana has been caught in such a situation. As per media reports, the Delhi pacer was punched repeatedly by a Noida policemen after an argument over parking in 2014.

The 31-year-old cricketer is currently a part of Kings XI Punjab (KXIP) in the Indian Premier League (IPL). Awana has also made two appearances for India and that came in a T20I series against England in 2012. 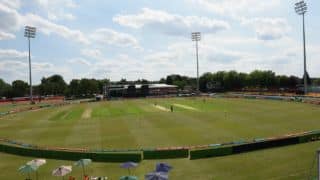