Led by Parvinder Singh's valiant century, a resolute batting display by Uttar Pradesh made West Indians' bowlers toil hard on a lifeless wicket at the Jadavpur University Ground as their three-day warm-up game ended in a draw on Saturday. 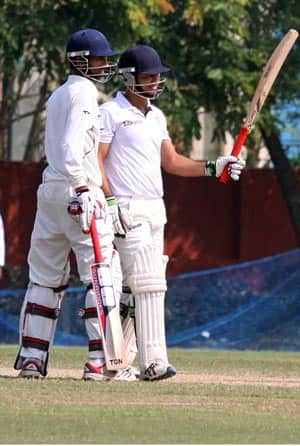 Led by Parvinder Singh’s valiant century, a resolute batting display by Uttar Pradesh made West Indians’ bowlers toil hard on a lifeless wicket at the Jadavpur University Ground as their three-day warm-up game ended in a draw on Saturday.

The Indian side declared at 372 for nine replying to the visitor’s first innings total of 466.

Some dazzling strokeplay spearheaded by Chris Gayle and Marlon Samuels and a flurry of wickets in the West Indians’ second innings lit up the day’s final session as the visitors reached 199 for five with UP captain and leggie Piyush Chawla picking up four for 72.

Gayle attacked from the outset and put on 68 with opening partner Kieran Powell (15), before the latter was castled by Chawla. Gayle 58 (49b, 11×4) fell a little later with Chawla taking a smart return catch.

Unperturbed at the fall of two quick wickets, Samuels continued the aggressive show, reaching his fifty in just 42 balls. However, his 84-run stand with Denesh Ramdin for the third wicket ended after Samuels (58, 47b, 9×4 1×6) holed out in the deep off tweaker Arish Alam.

Chawla then removed Ramdin (41, 53b, 5×4 1×6) in the next over to leave the visitors at 175 for four. The leg spinner also snared his counterpart Darren Sammy (8), who got caught in the hands of Arish Alam in the deep.

Resuming at 206 for five overnight, UP added another 166 runs in 43 overs as the Caribbean bowlers struggled to make early inroads. Pacer Sheldon Cottrell (three for 65) and left arm spinner Veerasammy Permaul (three for 124) were the most successful Windies bowlers.

Playing his 50th first class game, Parvinder scored his ninth ton when he cut Cottrell through backward point for four. Parvinder (112, 17×4, 2×6) became the first casualty of the day as he was caught at gully fending a short ball from Cottrell.

Chawla then joined overnight not out batsman Amir Khan in the middle as the duo added 69 runs to take the score to 329 for six at lunch. Both batsmen enjoyed a reprieve each.

Powell failed to latch on to a difficult chance at forward short leg with Khan just on 13 while Tino Best failed to grasp a Chawla skier. The unfortunate bowler on both occasions was Permaul.