Few expected Durham to lose their final match of the 2018 County Championship, against Middlesex at Chester-le-Street. The target, after all, was a mere 167, and they were 45 for 1 at one stage. Then all went wrong: only 54 more were added as Durham slumped to a 57-run defeat. Paul Collingwood, in the last match for Durham, was bowled for 10 by a straight, short-pitched ball from Martin Anderssen that did not rise.

Collingwood had scored 32 in the first innings, and got Sam Robson and Dawid Malan in the Middlesex second innings. It could have been a fitting farewell for the captain, but Durham squandered a massive first-innings lead of 189. The Durham wickets were shared by Tim Murtagh, Ethan Bamber, James Fuller, and Anderssen.

“It was not quite the fairytale ending I was hoping for. It’s 23 years, I do feel a little bit sad. It’s the right time. I’ve put all my efforts into it and everybody only has a certain shelf life. I’m very satisfied and content with what I have achieved in the game. Hopefully the club will keep moving forward,” said Collingwood, as quoted by ESPNCricinfo.

“It has been a really surreal week. All the good luck messages and thank-you messages, it takes your breath away. Not the fairytale ending I was hoping for, but I can still have a smile on my face going into retirement after putting all my effort into it.” 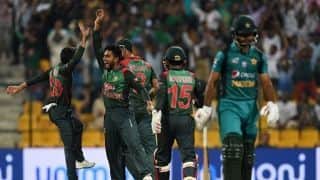