While Jimmy Neesham and Virender Sehwag are well known 'troll kings' on Twitter, it was Paul Collingwood who joined the bandwagon this time.

Thanks to social media, cricketers’ sense of humour has come to the knowledge of their fans. While Jimmy Neesham and Virender Sehwag are well known ‘troll kings’ on Twitter, it was Paul Collingwood who joined the bandwagon this time. It all started with a tweet stating World XI’s tour to Pakistan. The news contained speculations of former England captain and World T20 title-holder Collingwood to be among those who will feature in the XI. However, it did not go well with a particular named Danny Ando, who expressed his disappointment over Collingwood being called a big name . READ: BCCI unsure of Indian players participation for Pakistan vs World XI fixtures

While it could have been a humiliating affair for any other world-class player, Collingwood won Twitter over with his simple yet witty take on the matter. Collingwood reasoned his selection among big names with the funny take that there are Eleven letters in my [Collingwood s] surname . Here is the tweet:

Eleven letters in my surname…

The talks of the World XI vs Pakistan match happening has been doing the rounds since the country won their maiden Champions Trophy title earlier in 2017. “I have all the names, but will announce them in a day or two. All top players will come. “Players from England, New Zealand, West Indies, Sri Lanka, Bangladesh, Afghanistan and Zimbabwe have agreed to play the World XI tournament in Pakistan. India, however, has declined to send its players,” PCB chairman Nazam Sethi told cricket.com.au about the World XI. 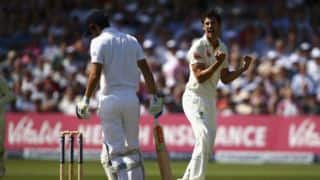