None of Myanmar's scoring shots produced more than a single.

While the Twenty20 format has proved to be a guaranteed thriller time and again, Tuesday s match between Myanmar and Malaysia during the ICC World T20 Asia Regions Qualifiers in Kuala Lampur turned out to be a damp squib with the most extraordinary scorecards.

Put into bat in a rain-affected match, Myanmar were reduced to 9 for 8 from 10.1 overs before the rain arrived again. Six batsmen departed for ducks with Malaysia’s Pavandeep Singh returning with exceptional figures of 5/1 in his four overs.

According to a report in ESPNCricinfo on Tuesday, none of Myanmar’s scoring shots produced more than a single.

Chasing a revised target of 6 in 8 overs, Malaysia were off to a poor start. They lost both openers for ducks in the first over. Suhan Alagarathnam however, registered the win for his team when he hit the only shot the match, which was a six to give Malaysia an eight-wicket win by the Duckworth-Lewis method. 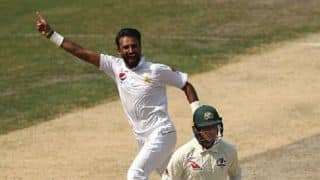