Karachi: Amid mounting speculation on Pakistan’s participation in next month’s ICC World Twenty20 (T20) in India, the country’s Cricket Board today said it is not under any pressure from the ICC to send its team and a final decision remains solely dependent on government clearance. Pakistan Cricket Board is awaiting government go ahead to travel for the mega-event starting march 8. “Until now no such thing has come from the ICC nor was any such thing discussed at the recent ICC meeting where we raised our concerns clearly about security for the Pakistani players in India,” a top PCB official told PTI today. READ: Pakistan Cricket Board delay declaring Asia T20, World T20 squads

The PCB’s statement came in response to media reports that ICC had warned Pakistan of legal consequences should they withdraw from the tournament. The official admitted that if government does not give its permission to play in India for security reasons, there was nothing the PCB could do. “Look we have got no instructions or directions from our government as yet about sending the team for the World T20. We have asked for advice and we are waiting for it,” the official said. When asked if the PCB apprehends any action from the ICC in case of a pullout, the PCB official said the world body did nothing when Australia pulled out of the ICC World Youth Cup in Bangladesh for security reasons. READ: Yasir Shah to appeal against doping suspension to ICC

“Has the ICC taken any action against them? All cricket boards, when it comes to security and safety issues, have to depend on advice from their governments. The bottom-line is we made our position clear at the ICC meeting and we feel there is a genuine reason for concern if our players play in India,” he said. He noted that it was the ICC which had itself withdrawn Pakistani umpire Aleem Dar from officiating in a bilateral series in India few months back. “Have not countries and their boards in the past withdrawn from ICC events including the World Cup on security and political grounds? We have never said we will not play in the World T20 what we made clear at the ICC meeting was simply that if our government advised us against sending the team to India we will request the ICC to shift our matches to neutral venues,” the official added.

The official said PCB’s position was made clear at the ICC meeting and it would be foolish to draw comparisons between the Pakistani contingent of athletes going for the South Asian Games in India and the cricket team. “Even the Pakistani athletes went to Games after government clearance and only after a high-level delegation of Indian Olympic officials and organisers came to Pakistan and met with our National Olympic and government officials to convince them to send contingent,” he noted. READ: Yasir Shah banned for 3 months by ICC

“We have genuine concerns and past events in India show we have genuine reason to be careful. The BCCI has promised foolproof security for all teams and we know they will do their best but we still have to wait for clearance from our government,” he added. 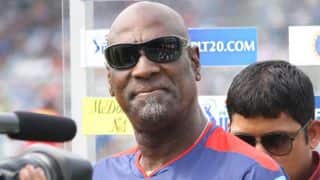