PCB Chairman Ijaz Butt on Thursday denied that he wrote Pakistan President and Board Patron Asif Ali Zardari for extension of his tenure but refused to divulge details of the meeting with him. 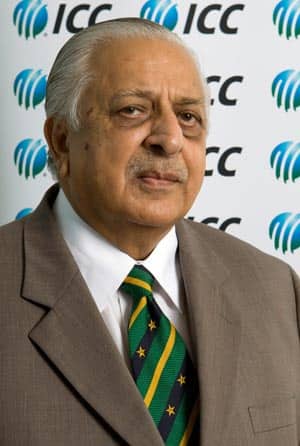 PCB Chairman Ijaz Butt on Thursday denied that he wrote Pakistan President and Board Patron Asif Ali Zardari for extension of his tenure but refused to divulge details of the meeting with him.

Butt’s term as PCB chairman is scheduled to end on October 8 as per the notification issued by the government at the time of his appointment to the post three years back.

But, there are reports that Butt has sought a six-month extension from Zardari. However, Butt denied any such move.

“The President appointed me as chairman of the Board and reposed faith in me. He has always supported and backed me. He is the boss and I don’t want to comment on issues that are confidential,” Butt said.

“I have not written to the President asking for an extension, it is not true. I took this position because I am passionate about Pakistan cricket. But I don’t want to discuss an issue on which sooner or later a decision will be taken,” Butt said.

The media is going abuzz with the reports that Butt might not get an extension and the President will go for a change. Presidential spokesman Farhatullah Babar also confirmed that no decision has been taken on the issue yet.

“No decision has been taken as yet. When his tenure officially ends we will see,” Babar revealed.

Butt said he did not had the time to go through the media reports as he had been very busy with his work.

“When the time comes we will see right now I am carrying on my routine work,” he added.

Despite all the speculations, it is business as usual for Butt, who has drawn criticism for his working style particularly his handling of the relationships with other Boards and the ICC.

The PCB chairman is scheduled to leave for Dubai on October 9 to attend the ICC executive board meeting.

“The ICC has already sent the ticket for Butt and he is leaving on 9th for the meeting,” a board official said.

The cricket community admitted his stay at the top often evoked criticism, but credited him with the success of the national team in the recent past.

“Look there is always good and bad and right or wrong in every board, but personally I am satisfied with the way the team has developed and performed despite all the problems and how new players are coming up,” former captain, Rameez Raja said.

The former Chairman of the PCB, Tauqir Zia also conceded that while he would not describe Butt’s tenure as a successful one, but cricket-wise things had been good.

“Purely from the cricket point of view the team has done well in these three years and is moving forward and is also playing lot of cricket.

“We lost three key players and some others but the team has done well and despite foreign teams not coming to Pakistan cricket activities have increased in the country,” Zia said.

The names of former Pakistan captain Zaheer Abbas and banker Ali Reza have been doing the rounds as possible candidates for the PCB chairmanship if Butt does not get the extension.

Sources said that former Test captain Javed Miandad, who is the director-general cricket in the Board, is also interested in the top position.

Butt in a recent interview had described the spot fixing scandal involving Salman Butt, Muhammad Asif and Muhammad Aamir as the most painful part of his tenure.

He said that his success in rooting out players’ power in the national team and allowing new players to come through was his biggest achievement. (PTI)