Change in anti-corruption law could allow Aamer to train before ban ends.

Pakistan Cricket Board (PCB) is waiting anxiously for the ratification of new anti-corruption code of International Cricket Council (ICC) in October to start a fresh move to get banned pacer Mohammad Aamer back into the sport. The ICC executive board is scheduled to take a decision on these new anti-corruption laws in October, a senior PCB official said.

Once the amendments are made in the anti-corruption laws, it will have a clause which allows banned players to resume training and even play cricket at club or domestic level before their ban ends, the official explained. He said the new anti-corruption code/laws were ready for consideration and ratification by the executive board due to the interest taken by the PCB.

“We had taken up this issue with input from our legal counsels in the United Kingdom,” the official said. “The ICC committee which has worked on revising the existing anti-corruption code looked into our suggestion that a clause be added allowing banned players time before their ban ends to resume cricket,” he said.

The official said once the new laws were ratified in October, the PCB would file an application with the ICC seeking permission to get Aamer back into cricket. “We don’t think the ICC is going to allow him to play international cricket before the end of the ban but what we want is he gets enough time to train and be ready to play top cricket when the ban ends,” he said.

The left-arm pacer’s cricket career came to a halt in September 2010 when he was suspected by the ICC for his role in spot-fixing scandal during the fourth Test against England at the Lord’s. His teammates, Mohammad Asif and Salman Butt were also suspended by the ICC. In February, 2011 the anti-corruption tribunal also banned them for minimum of five years for the offence.

The official said that once the PCB moves an application for Aamer, it will then also look into the cases of Butt and Asif as their ban period was different from Aamer’s. 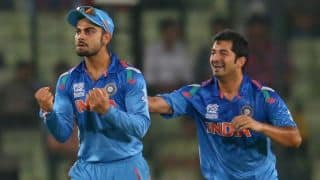