The Pakistan Cricket Board is keeping its option open of legally challenging the ICC on the decision to have its members make constitutional amendments to ensure there is no government or political interference in the cricketing matters. 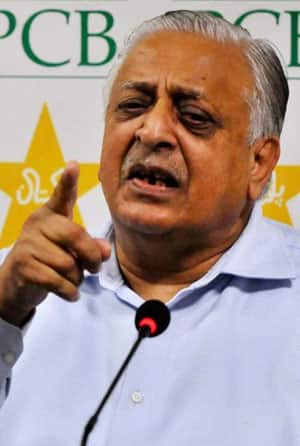 The Pakistan Cricket Board is keeping its option open of legally challenging the ICC on the decision to have its members make constitutional amendments to ensure there is no government or political interference in the cricketing matters.

Well placed sources in the board disclosed to PTI that the option of legally challenging the ICC move had not been dispensed with.

“We have this option available to us. We are studying the constitutional amendments made and suggested by the ICC,” one source said.

He confirmed that the PCB had not objected to the constitutional amendment when it was passed at the ICC executive council meeting in Hong Kong last month for a specific reason.

“It would have served no purpose to object to it as all other members would have approved of the constitutional amendment and we would have been left nowhere.

“But what we succeeded in doing was to get the ICC to give a two-year period for the implementation of the amendment by all member boards. We are now studying all the pros and cons of this amendment keeping in mind our particular environment where government support is necessary for the sport in Pakistan,” the source said.

Another source said that after PCB Chairman Ijaz Butt returns home from abroad on July 21 he would contact the President and government officials to discuss the recent ICC directives, which make it clear that if a member country does not implement the constitutional changes in two years time it will face severe sanctions including suspension of membership.

“It is only after the Chairman discusses the issue with the President and government officials that we can come to a conclusion. But if things don’t work out and the government says no then the legal option is available to us, given the special circumstances of our cricket set-up,” the source said.

He said that the PCB had in the first place opposed the constitutional amendment by the ICC in April and sent it a legal notice on it.

“We have to see how it goes from here but we are keeping our options open. If we are not in a position to abide by the ICC directives than we will have to decide on next option,” he said.

The PCB in its response to the ICC task force report on Pakistan cricket on Wednesday defended its system where the President of Pakistan has the authority to appoint the Chairman of the PCB and members of Governing Board.

“The circumstances in Pakistan are unique and cricket administration requires and deserves government support without which international cricket may not be able to return to Pakistan. Keeping in view the extraordinary security situation in the country, having the President as Patron of PCB adds tremendous value and comfort,” the PCB said in its response.

Australia boycott of Sri Lanka tour will be threat to cricket: Murali