Sharjeel Khan and Khalid Latif have already been found guilty, and PCB has to give its verdict on Nasir Jamshed's involvement in the same case.

The anti-corruption tribunal of the Pakistan Cricket Board (PCB) has reserved its judgement on the allegations of spot-fixing against discarded Test batsman Nasir Jamshed and will announce it in the next 30 days. Jamshed, a left handed opener who resides in the UK, has failed to make any appearance before the tribunal, which was formed last April to probe into the spot-fixing scandal that broke out during the second Pakistan Super League (PSL) in Dubai in February.

The tribunal, which has already found Pakistani batsmen Sharjeel Khan and Khalid Latif guilty of breaching the PCB’s anti-corruption code and banned them for five years besides fining Latif, now has to give its verdict on Jamshed involvement in the case.

Jamshed, who is also being investigated by the UK’s national crime agency, is accused of having ties with bookmaker Yousuf Anwar and setting up meetings for him with Sharjeel and Latif in Dubai. Jamshed, 27, who scored three successive ODIs against India in 2012-13, is accused of being the brain behind the PSL spot-fixing scandal.

Nasir’s lawyer Hasan Waraich told the media, after pleading his case before the tribunal in Lahore, that his client was only facing the charge of non-cooperation with the PCB in the case. “I have given my final arguments in the case and the fact is that in the PCB documents this person named Yousuf Anwar is not even mentioned as a bookmaker,” he claimed.

PCB’s legal counsel Taffazul Rizvi, however, rebutted Waraich’s claim and insisted that the board had given all evidences in the documents to prove Yousuf Anwar was a bookie and had links with Nasir. The PCB had suspended three other players — Muhammad Irfan, Shahzaib Hasan and Muhammad Nawaz — in the PSL case.

Tall left-arm pacer Irfan and all-rounder Nawaz have served their bans for not reporting approaches to them but the tribunal is yet to give a verdict on Pakistani batsmen Shahzaib, who played in Pakistan’s 2009 World T20 winning squad.

An appeal by Sharjeel against his ban has already been dismissed by an independent adjudicator, appointed by the board, while Latif’s appeal is due for hearing before the retired Supreme Court judge later this month. 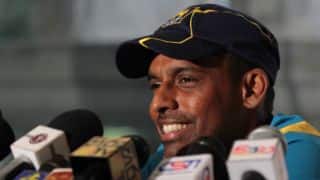