Craig Simmons is looking good for another big score here.

After winning the toss and electing to bat first in the final of the Big Bash League 2014, the Perth Scorchers started off cautiously against the stringent line and length of the Hobart Hurricanes, but then Craig Simmons has got into his elements and has upped the scoring rate significantly, accruing 38 for the loss of one wicket in the powerplay overs.

Scorchers captain, Simon Katich opened the batting alongside big-hitting Craig Simmons. But Katich didn’t last long, as he fell to Dimitri Mascarenhas in the fourth over. After his dismissal, Simmons started to free his arms, and hit a couple of boundaries in the fifth over off Ben Hilfenhaus. Then he took the charge to Mascarenhas as he plundered him for 12 in the sixth over.

Simmons seems to be in the grove for another big score, but the Hurricanes have the depth and variety in their attack as well. 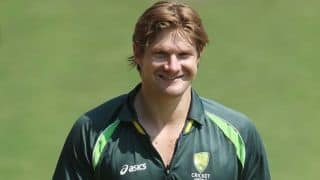