Perth Scorchers is also keen to rope in South Africa's Dale Steyn or Morne Morkel and has approached West Indies Carlos Brathwaite for final spot in the squad.

Two time Big Bash League (BBL) champions Perth Scorchers sign a quartet of Australia stars along with England’s pace bowler for the upcoming season. Scorchers have signed seven players and have just one spot remaining for the upcoming BBL season. From Australia, Scorchers have re-signed Australia’s Adam Voges, Mitchell Marsh, Shaun Marsh and Nathan Coulter-Nile. The other players is David Willey from England. They have also signed young all-rounder Hilton Cartwright and promising young quick Jhye Richardson. Now Scorchers are left with just one vacancy on their 18-man squad to be filled with overseas players. ALSO READ: Brad Hogg open to coach Perth Scorchers in future

The seven new signings join new recruit Mitchell Johnson, whose deal was finalised earlier this month. Scorchers coach Justin Langer speaking to cricket.com.au said, “We’re delighted to have retained the majority of our squad, which helped us make the BBL semi-finals for the fifth consecutive year last season. It’s particularly pleasing to have our players committed and secured at this point in time, allowing us excellent preparation for another tilt at the BBL.” The 24-year-old Cartwright has played five games for Scorchers last season and also played crucial role with Alchohol.

The Under-19 representative – Richardson made debut in all three formats for the Scorchers and Warriors last year. Willey’s availability for BBL season 6 will depend on his selection for England, who are scheduled to play white-ball cricket in India in January. And the left-armer’s preparations for the upcoming season could be interrupted by a hand injury he picked up in the T20 Blast finals last night. ALSO READ: Johnson signs with Scorchers for BBL 2016-17

Scorchers final spot seems to be a mystery as of now, although Langer has hinted upon South Africa’s Dale Steyn and Morne Morkel. Langer added, “(The Scorchers) would definitely be interested in signing Dale Steyn or Morne Morke. But that’s one of the toughest things about the BBL, trying to find overseas players because great players like that are playing international cricket so you either have them for none of the time or some of it. They’d have to work it out with their governing board. We asked David Miller but he’s got a verbal agreement with the other guys. Not sure how it’s going to work out. These things evolve but it’s not as simple as it sounds. Imagine having Dale Steyn here. Who wouldn’t (want him)?” ALSO READ: Johnson eager to add more energy to BBL 2016-17

South Africa will host Sri Lanka for three Test, three Twenty20 (T20) and five One-Day International (ODIs) between December 26 and February 10. As per ESPNcricinfo.com, both Steyn and Morkel (who was left out of the Proteas’ World T20 squad) have expressed interest in playing in the BBL. Langer is also keen to include West Indies players and special interest towards Carlos Brathwaite but with the turmoil WICB are going through, they cannot make themselves available for domestic competitions for being eligible for international selection.

Langer ended the conversation saying, “ Guys like them, Carlos Brathwaite, Jason Holder, if they are to play BBL they have to renege on playing for their countries. It’s courageous for people to do that. There’s lots of talk and lots of speculation but in reality not a lot give up international cricket to come and play BBL. You’ve seen controversy (around) Chris Gayle, Sunil Narine, Dwayne Bravo doing that, but not sure some of those players starting off international careers or still playing international cricket would like to. Of course we’d like to have them. Carlos would be brilliant in the BBL, he’s like a giant, he whacks them, he bowls, he’s a gun athlete, he fields but to get him there he’s got to sign off playing for the Windies. I wouldn’t do that.” 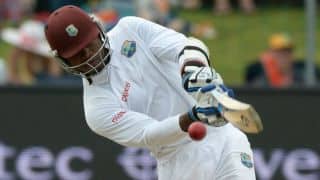