Scorchers have paced their innings beautifully so far.

The Perth Scorchers, building on their solid start, seem set for a total in excess of 160 against the Hobart Hurricanes in the ongoing final of the Big Bash League 2014. They are currently placed at 117 for the loss of two wickets after the completion of 14 overs.

Craig Simmons departed for 45 in the 11th over after laying the foundations of their innings. He dispatched the Hurricanes’ attack around the park  during his stay in the centre.

Scorchers captain, Katich departed early in the innings, but they still have Shaun Marsh in the middle, who is going great guns along with Adam Voges.

With just 6 overs to go in their innings and with eight wickets in hand, the Scorchers will be confident of a total around 170-180. 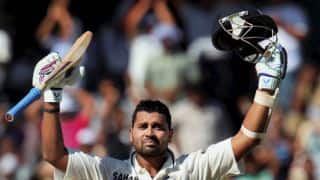