Perth Scorchers' skipper Simon Katich won the toss and elected to field against the Otago Volts in the Group A match of the Champions League T20 2013 in Jaipur. A one-sided contest comes to an end. Otago won the game comprehensively by 62 runs. Broom’s 117 not out was a fabulous display of batting. The record total of 242 for four was too good for Volts. Scorchers gave a decent fight scoring 180.

Neil Broom has been adjudicated the Man of the Match. Hardly any surprise.

Do join us for the second game for the evening — Rajasthan Royals and Highveld Lions.

Scorchers need 117 off 30 deliveries at nearly 24 runs over. That means a boundary per ball. Scorchers lost Voges in the 11th over caught Butler bowled Nathan McCullum. Carnege by Neil Broom and Ryan ten Doeschate was magical. This has been a fantastic bowling performance after Otago scored a mammoth batting performance.

Scorchers need 169 runs to win in their final 10 overs. Somehow they are well behind the required run-rate. Otago are keeping the things tight and not allowing easy flow of runs. Their fielding too has been sharp. Only 33 runs cam in the last 30 balls. This is not helping Scorchers’ cause. They need some big overs.

First five overs have yielded 41 runs but Scrchers have lost three quick wickets. Butler picked up Davids off the first ball when the batsman cut the ball straight to the third-man. Agar was out off the last ball but not before he hit a six. Katich was dismissed in the next over run-out without facing a ball.

Adam Voges and Hilton Cartwright are resurrecting the innings but Scorchers are well behind the eight-ball.

Neil Broom has finished with 117 off 56 balls. This has been a special innings. He hit eight sixes and nine boundaries. The last five overs produced 93 runs. This has been a punishment meted out to Scorchers. It was an unbelievable recovery by Otago who were 22 for two after five overs.

Michael Beer gave away 32 off four overs. He was the most successful bowler in terms of runs given. Joe Paris took two wickets of two balls but he went for 50 runs of his four. And he did bowl the only maiden of the innings.

Will Perth Scorchers win the game? Otago have looked a class apart.

The partnership between Neil Broom and Ryan ten Doeschate is assuming significant proportions. The last five overs produced 72 runs with Broom pressing on the accelerator. How quickly has this game changed? This is some exhibition of batting. Ryan ten Doeschate is using his long handle to good effect. Where will Otago finish?

Broom gets to his fifty with a six over covers off Michael Beer.

Derek de Brooder has pressed on the accelerator. Otago, after getting a tough start, have consolidated. They last five overs have produced 55 runs. ‘Keeper de Brooder falls at the wrong time at 45 off 28 deliveries bowled by Adam Voges. Broom is playing a sheet-anchor’s role. What can Otago get? The balance has tilted in favour of Otago. But the wicket has reduced their advantage just a wee bit.

Joel Paris has caused a bit of panic in the Otago batting lineup snaring Hamish Rutherford and in-form Brendon McCullum. After five overs, 22 runs have been scored. At this stage Perth Scorchers are on top. Derek de Brooder, Otago ‘keeper, is looking a tad restless. He is unbeaten on two off nine balls in a rather not so convincing manner. Broom is looking to consolidate. He was dropped by Voges off Paris. Otago need to look for singles. They mindlessly slogged during this period.

Joel Paris, 20, is making his debut and he has scalped two wickets in two balls. What a start that for a debutant. Nothing can be better than this. Two wickets and no runs.

Perth Scorchers‘ skipper Simon Katich won the toss and elected to field against the Otago Volts in the Group A match of the Champions League T20 2013 in Jaipur.

The sun is beating down at Ranchi, giving Perth an opportunity to play after their first tie was washed out. As for Otago, they come in with a clean record of three wins from as many games in the qualifiers stage.

Hello and welcome to the live updates of the Group A match between Perth Scorchers and Otago Volts in the Champions League Twenty20 2013. I, Sarang Bhalerao, will be bringing you the momentary updates of this match.

You can watch the video preview here 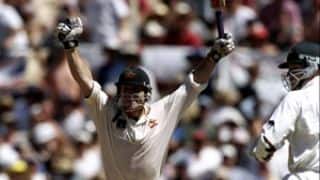