Having rediscovered his batting form following minor tweaks to his technique, Peter Handscomb says he is fully prepared to face India.

Having rediscovered his batting form following minor tweaks to his technique, Australia batsman Peter Handscomb says he is fully prepared to face India should the selectors pick him up for the summer home series.

Handscomb was one of the Test hopefuls when he toured with Australia A to India earlier this year. But just one double-digit score across six innings saw him being ignored for the UAE tour where Australia faced Pakistan in a two-Test series. Back home, a patient Handscomb was determined to win his place back as he starred for Victoria in their title winning run in Australia’s domestic one-day tournament. He top-scored with 361 at 51.57 and is now aiming to replicate the limited-overs form into red-ball cricket in the Sheffield Shield Australia’s first-class tournament.

I m feeling really good at the moment, Handscomb was quoted as saying by Cricket.com.au on Wednesday. It s obviously been well documented that I ve done a lot of work over the preseason and now it s just time to go and make runs. To do well in the JLT Cup and help Victoria get a win was amazing and now I ve got to do the same in the Shield.

In 13 Tests, Handscomb has 829 runs with two centuries and four scores of fifties at 43.63. His last Test was against South Africa in Johannesburg following which he was dropped. I m ready to go. If the selection occurs, if I get picked for the summer series (against India), I m ready. I m feeling good and hopefully I can take that chance like I did when I first came into the Test side.

Handscomb has done some minor adjustments to his batting technique which has given him much-needed confidence. It s still a pretty similar technique to what it has been for the last three or four years when I ve made a lot of runs against the red ball for Victoria and Australia, so I m confident in it, he said.

During his run in the JLT Cup (domestic one-day tournament), Handscomb was in touch with the Australia selectors. I got a couple of text messages through the JLT which was nice, just saying good work, keep it going , just stock standard stuff. But ultimately the message always the same, go out and make runs as a batter, he revealed.

Despite the Test spots up for grabs, Handscomb is keeping his eyes focused on making runs for his domestic team Victoria and isn’t thinking far ahead. Everyone is aware of (Test spots) but you re still thinking about making runs for your state too. You can t go into a game thinking, Right I need to make runs here so I can get selected for Australia , he said. 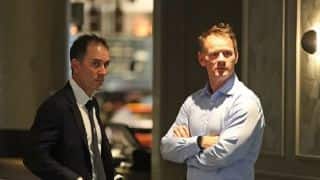