Moores said there was no question of Cook giving up the leadership of the side.

England coach Peter Moores has insisted he won’t be a party to taking the captaincy off Alastair Cook in a bid to get the opener back to his best form with the bat.

It is now 24 innings since Cook scored the last of his England record 25 Test centuries, a sequence that includes the 100-run second Test defeat by Sri Lanka at Headingley on Tuesday that gave the tourists a two-match series 1-0.

But Moores said there was no question of Cook giving up the leadership of the side, even on a temporary basis, ahead of the start of next month’s five-Test series at home to India.

“No it wouldn’t cross my mind,” Moores said on Wednesday. “The key here is, does Alastair [Cook] want to captain England? Yes he desperately does want to.”

After their 5-0 Ashes thrashing in Australia, England installed a new managing director in Paul Downton, a new, a new chairman of selectors in James Whitaker and recalled Moores for a second spell as head coach.

However, all three insisted it was vital Cook remained as England captain.

England great Geoffrey Boycott insisted the trio’s fear of being made to look foolish lay behind their continued support of Cook, much criticised for his tactics in the field at Headingley.

However, Moores insisted there was far more behind his backing for the 29-year-old Cook than blind faith and preserving a united corporate front.

The former Sussex wicketkeeper said Cook had displayed leadership qualities even when, having already been dismissed, he was in in no position to directly influence England’s rearguard action with the bat at Headingley that saw them to within sight of a draw before last man James Anderson was out to Tuesday’s penultimate ball of the match.

“He [Cook] wasn’t on the field but it was one of his best days as England captain because one of the challenges at this level is that is becomes so easy to go internal when things aren’t going well, but he came in with one clear view to make sure that everybody knew we were going to fight and show spirit as a team,” Moores explained.

“That was the job of everybody. Whether you could influence the game or not. If you weren’t influencing the game on the field then you were going to help with input off it and the way he carried himself and the way he worked said something about him and his character and his appetite for the job.”

Moores added: “I look at that and the way he is talking in interviews, he has got a drive and a desire to build the team and put his own stamp on it.

“My job is to help him do that.

“People genuinely see, as a bloke, he’s a solid Englishman who wants to do well for his country.

“He’s done that in the past and will do in the future.

“He’s got a clear picture of what he wants as a team and how that team should operate.”

As for Cook’s form with the bat, Moores said it was just a matter of time before the Essex left-handed opener came good again.

“If he gets himself into form someone is going to pay.” 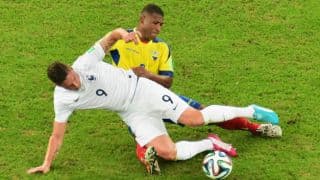 I am apprehensive about security in Pakistan, says Grant Flower