The series between England and Sri Lanka is currently tied at 2-2.

England coach Peter Moores has called on his players to produce a complete performance against Sri Lanka at Edgbaston as they look to start his new era with a series victory.

Moores’ team face a decider in the best of five-matches one-day international series on Tuesday after the tourists held their nerve to claim a seven-run win at Lord’s two days ago.

For Moores, in his second spell as England coach after being reappointed earlier this year, series success will be a much-needed morale boost as he and captain Alastair Cook seek to set a new tone following the humiliating Ashes whitewash in Australia.

Asked about the significance of a series win, Moores said: “It would be great. We’ll treat it like a final. We know we have a World Cup coming up, and there will be a lots of big games in that. It would be great to win the series, and we’ll put everything we’ve got into it.”

England’s performances so far have lurched to extremes, especially at Durham and Manchester, where they struggled to cope with Sri Lanka with both bat and ball.

But Moores believes they have enough quality to dominate against Sri Lanka and he wants them to aim for a perfect display in Birmingham. “So far through the series, we haven’t quite put the complete game together. The closest one was at the Oval. I hope we’ll do that tomorrow [Tuesday]. We’ve shown we can beat them, and we can be very competitive. We’re pretty confident that if we play well we have got a good chance of a win.” The match will also provided rising England stars Jos Buttler and Chris Jordan with a chance to press their Test claims.

The England coach could hardly help but be impressed by Buttler’s 61-ball century as the hosts nonetheless failed to chase 300 for nine on Saturday. “It was brilliant. To watch it and be there was great. I don’t think you want to be set in stone, and you never want to put ceilings on people. He’s improving and it was great to see him play like that. Certainly how he played the other day hasn’t done him a lot of harm – it was a fantastic innings.” 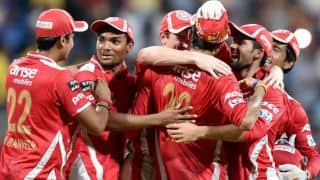 IPL 2014: Kings XI Punjab were certainly the best side in IPL 7