Bell thinks Moores's 5-year stint with Lancashire would help him as an international coach.

Ian Bell expects Peter Moores to be a better England coach second time around but believes there is no substitute for player responsibility. Bell is one of a handful of senior England players Moores had inherited after Andy Flower stood down following the team’s 5-0 Ashes drubbing in Australia.

Moores was England’s coach during a two-year spell from 2007 to 2009. However, he was forced out after a rift with Kevin Pietersen that cost the latter the England captaincy, although English cricket chiefs ended the star batsman’s international career after the recent Ashes debacle.

Bell helped Moores, who restored his reputation at Lancashire, get his second stint as England coach off to a winning start by making a fluent 50 during a 39-run victory away to Scotland in a rain-marred one-day international in Aberdeen. “He’s a very good coach with lots of qualities, and I’m sure he’s learnt from mistakes he’s made — I know he’s said that,” Bell said.

“I think he’s got that experience of probably understanding international cricket a bit more. I’m sure he’s learnt a lot in the five years he’s been with Lancashire.” “Maybe he will go away a bit from looking at stats all the time and give a bit more responsibility to us. It’s important for us to make decisions.”

At the age of 32 and with 98 Tests and 141 One-Day internationals (ODI) behind him, Warwickshire right-hander Bell certainly has the experience to do just that during upcoming home series with Sri Lanka and India.  “Players have to stand up. Looking back, you can’t blame the coaches for what happened in the winter,” Bell said of an England tour programme that culminated in the embarrassment of a World Twenty20 loss to the Netherlands in Bangladesh.

“The players have to stand up and score runs and take wickets, no matter who’s coaching.” But having seen England bounce back from the despair of a 5-0 Ashes whitewash in Australia in 2006/07, Bell sees no reason why the current side cannot rise again.”Having been involved in 06/07, I think it is possible to turn things round, and I believe we can do it again.

“Yes, it will take a little bit of time. But in English conditions, I’d back us to beat anyone in the world. Bell’s position as a senior England batsman is all the more important given the side have lost so much valuable experience as a result of the decision to exile Pietersen and the ongoing mental health problems afflicting Jonathan Trott, once more taking a break from all cricket after being forced out of the Ashes.

“Hopefully now moving forward he will get the help he needs to get him back on the field and enjoying it,” Bell said of Trott before refusing to put a timeline on his team-mate’s county return. It’s difficult. I haven’t seen him enough to ask those questions…Only him and those close to him will know.”

England will be on the lookout for a new Test match number four in Pietersen’s absence and Bell was keen to fill the gap, although equally willing to take over Trott’s old post at three if that’s where captain Alastair Cook wants him to bat. I’ve already said I’d love to take the responsibility of four with Kev missing, but there’s minimal difference between three and four,” Bell explained.

“If Cooky wants me to bat three I’ll be really happy to do so. The balance of the team is the most important thing. I’ve always said I wanted to get as high in the order as I can and challenge myself and now is a good time to take that responsibility.” 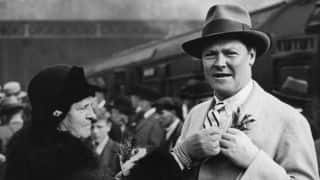