Fifty-two years ago, Contractor was struck on the back of the head by a rising ball.

As the cricketing world anxiously awaits progress from Phillip Hughes, a tale of hope comes from a man who survived a similar accident — former India captain Nari Contractor.

Fifty-two years ago, Contractor was struck on the back of the head by a rising ball from West Indies fast bowler Charlie Griffith, during a practice match in Barbados. Contractor, who was not wearing a helmet, was helped from the field but he started bleeding from his nose and ears and vomiting, before an emergency operation that saved his life.

The player was unconscious for six days and needed a further operation and blood transfusions, but he finally came round and, now aged 80, offered his best wishes to Hughes. The 25-year-old Australian, also a left-handed opener, is in critical condition after being hit on the base of the skull by a bouncer during a domestic game in Sydney on Tuesday.

“I wish Hughes gets well soon, my prayers are with him,” Contractor, who vividly remembers that fateful day in 1962, told The Hindu newspaper.

“Those were days when there were no helmets, no restriction on the number of bouncers in an over and no restrictions on beamers either,” he said.

“The pitches were uncovered. But it was the same for everyone then and we were prepared for the challenge.

“I must thank fellow cricketers who donated blood for me, and the surgeon who conducted the emergency operation. I was in the operation theatre for a long time.”

Few players have been in such dire circumstances, but New Zealand tailender Ewen Chatfield was also badly injured on his Test debut in 1975 when he was struck on the temple by a delivery from England’s Peter Lever in Auckland. As he lay on the field, Chatfield was given mouth-to-mouth resuscitation by England physiotherapist Bernard Thomas. He regained consciousness in hospital.

After his accident, Contractor was unable to build on his 31-Test career and he handed the captaincy to Mansur Ali Khan Pataudi. Among those who donated blood was West Indies legend Frank Worrell, a gesture that “showed the game transcended boundaries” said Contractor’s team-mate, Chandu Borde.
“Times are different now. There is so much protective gear,” said the former all-rounder.

“In our days, when we walked out to face men such as Wesley Hall or Griffith without helmets, we were not sure whether we would come back alive.”

The latest hospital update said there was no change in the condition of Hughes, who was knocked unconscious and had emergency surgery to relieve pressure on his brain. 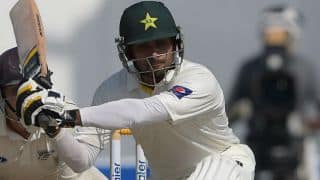