Phil Hughes upbeat ahead of ODI series against Sri Lanka

Phil Hughes upbeat ahead of ODI series against Sri Lanka

Australia has retained only three members from the Test squad that played against Sri Lanka, Phil Hughes is one of them, who will make his One-Day Internationals debut at the Melbourne Cricket Ground on Friday. 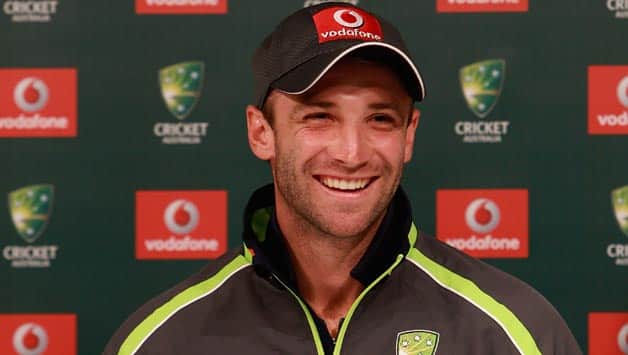 Philip Hughes is one of the three players, who played in the Test series against Sri Lanka, selected for the first two ODI matches © Getty Images

Australia has retained only three members from the Test squad that played against Sri Lanka, Phil Hughes is one of them, who will make his One-Day Internationals debut at the Melbourne Cricket Ground on Friday.

“It’s opportunity for guys coming in now, there are a few new faces around the squad,” Hughes was quoted as saying by Cricket Australia’s official website.

“And for those guys that I suppose are rested for the first couple of games, they play that much cricket, they’ll come back fresher and fitter,” Hughes added.

Pacer James Pattinson and all-rounder Shane Watson were left out of the squad due to injury. As a result Hughes, Aaron Finch, Usman Khawaja and Ben Cutting are hoping to make their ODI debut with selectors keeping 2015 World Cup in mind.

“There is inexperience there but it’s a good thing if you look at someone like Aaron Finch and Usman Khawaja, they’ve played very well for their states this season so I suppose the experience is there for state cricket but not for international cricket,” Hughes said.

Hughes, who has already played 20 Test matches, has been called as a ‘veteran’ in the young side that faces Sri Lanka on Friday. However, the 24-year-old laughed off.

“I’m not sure about a veteran. I suppose I’ve been in and out of the set-up for a number of years now and it’s good to have that experience but it’s not that much experience.”

Hughes said that Michael Hussey’s decision to retire was based on the future of the Australian team.

“It comes down to selection. Mike Hussey – we know what a great player he has been for Australia for a long period of time now, it’s great that we got that win in Sydney for him and that series win for him as well.”

“He’s been outstanding and he really deserved to go out in that way. The decision is totally out of my hands and they (selectors) just think it’s the right thing going forward.”

Hughes returned to playing county cricket in England and topped in domestic limited overs competition in the Worcestershire batting charts. He had an average of 83 and said he is ready for all formats.

“I feel like I’ve come a long way in one-day cricket, my stint in England in County Cricket for Worcestershire I felt like I performed quite well and obviously at the start of the season for South Australia.”

“My focus has been all three formats, I’ve spoken about the longer form (Tests) and I’ve done a lot of work there but in the back of my mind in practice it’s about the short form as well, I want to be that complete batsman playing three forms one day. I feel quite comfortable with my one-day game these days.”

“It’s a format where you have to attack and that’s probably my natural game. Instinct takes over and I really like to get in the front foot and attack the game,” concluded Hughes.

BCCI's Working Committee to meet at Mumbai next week