Some of the Tasmanian players attended Hughes's funeral and have been offered counselling.

Tom Cooper, friend of Late Phillips Hughes has opted to play in the Sheffield Shield match against Tasmania Tigers in Hobart on Tuesday. Fast bowlers Kane Richardson, Daniel Worrall and spinner Adam Zampa have opted out of  the game, reported ABC.

“I think it’s good that we’re going to get back on the horse and play as a team and hopefully do him proud,” he said. “Like it’s been said thousands of times it was a freak accident. “Everyone bowls bouncers all day every day so the fact that his name’s been associated with it is a bit sad because it could have been anyone,” said Cooper.

Earlier today, it was confirmed that the match would go ahead, after a period of uncertainty. As the arrival of SA team was expected to be late, the match timing was shifted to 11 am. “I think it was a little bit up in the air but they’ve made their decision to play this morning which is great,” said Tasmania coach Dan Marsh.

He said, “So we’ve just been telling them I guess ‘whatever you guys need to get up and play, we’ll do it. If you do not want to play we’ll be accommodating of that as well’. Some of the Tasmanian players attended Hughes’s funeral and have been offered counselling.

“Everyone’s been leaning on one another I think… From a Tasmanian point of view, I think they’re getting through it pretty well,” said Dan Marsh. Tasmania coach Dan Marsh said that Tasmania was trying to be as helpful to the SA team. David Warner: Fiancee and daughter helped to move on from Phil Hughes tragedy 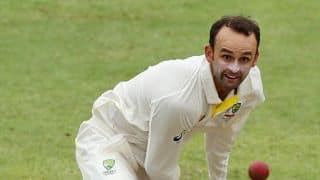