Warner posted a photo of both his daughters purchasing lemonade from one of the road-side stalls.

Having a world-class cricketer has its own pros and cons. The amount of respect the cricketer gets comes with the strenuous job of travelling to different parts of the globe throughout the year. However, David Warner took some time out with his dear daughters as Australia are in India for the limited-overs series. Warner, who is often caught posting various cute pictures of his two daughters, was this time seen having some fun in the streets of Chennai. Australia will start their five-match One-Day International (ODI) series with the Chennai fixture. READ: Australia cricket team donates autographed bats to the IVI

The weather in Chennai is currently quite hot and humid and, unaccustomed to it, Indi Rae and Ivy Mae took a lemonade break. Warner posted a photo of both his daughters purchasing lemonade from one of the road-side stalls and also mentioned that both are enjoying Chennai. Here s the post:

Both girls loving Chennai and also wanted to stop for a lemonade.

Australia, who arrived from a drawn Test series with Bangladesh, will also play three T20Is following the ODIs. 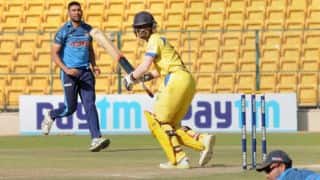