PHOTO: MS Dhoni in AN32 aircraft with the skydiving team

PHOTO: MS Dhoni in AN32 aircraft with the skydiving team

The Indian One-Day International (ODI) and Twenty20 International (T20I) captain MS Dhoni successfully completed his first parachute jump on recently . Dhoni was training with the Air Force skydiving team at Paratroopers Training School in Agra since August 6. He jumped from an AN32 aircraft and successfully touched Malpura dropping zone base. Dhoni also complete four more jumps from 10,000 feet, which also includes one at night. After successfully completing the five jumps, Dhoni has become a qualified parajumper. As part of the 106 Parachute Regiment of the Territorial Army (TA), the Indian skipper decided to train to qualify his rank of an honorary lieutenant colonel.

According to Hindustan Times, Dhoni underwent classes followed by basic exercises along with paratrooper trainees. The classes revolved around basic techniques of parajumping. The exercises were for Dhoni to prepare the body for jumping off the aircraft with a parachute. He can wear the respected Para Wings insignia if he completes five successful para-jumps.

Earlier, Dhoni shared picture of him with the Air Force skydiving team at Paratroopers Training School in Agra. In July, it was reported that Dhoni was set to spend some quality time with the armed forces before the ODI series against South Africa. Dhoni was bestowed as the honorary lieutenant colonel in the elite Parachute Regiment by the Territorial Army for his cricketing contributions in November 2011. “Why I got here is because of cricket. I would like to serve actively in the Army only after cricket. I don’t want my cricket to suffer because that is something I am good at. Once my cricket career is over, I would definitely like to serve in the Army,” he had then said. 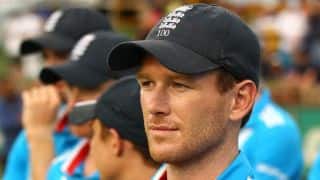