Having led his side to two convincing wins in the ongoing ICC U-19 World Cup, young batting sensation Prithvi enjoyed time off the field by getting clicked with a baby.

Sachin Tendulkar had retired. This void seemed irreplaceable to Indian cricket. Less than a week later, not too far from Wankhede Stadium, Prithvi Shaw slammed 546 in school cricket. He was 14 then, and now at 18, he is leading the Indian Under-19 side in the World Cup at New Zealand.

A fellow Mumbaikar and devout Tendulkar fan, Prithvi’s skill has often drawn comparisons with the master and now he is gradually getting the taste of his idol’s hero worship.

Having led his side to two convincing wins in the ongoing ICC U-19 World Cup, young batting sensation Prithvi enjoyed time off the field by getting clicked with a baby.

India U19s star Prithvi Shaw shaking hands and literally kissing babies as he gets an early taste of fame at #U19CWC!

Huge praise by Ian Bishop after this shot from Prithvi Shaw, calling it 'that is tendulkar' #U19CWC pic.twitter.com/zVkyY0knfj

For his style and technique, Shaw has in recent times often drawn comparisons with the batting icon, who had followers across the cricketing world.

Prithvi Shaw has only just turned 18, but already has more cricket experience than many aspiring young players will have in their whole career #U19CWC pic.twitter.com/vR2FysAHLq

During the match between South Africa and West Indies, a family of spectators asked the India skipper to hold and pose with their baby.

Shaw, who has posted the photo on his Instagram account, seemed to be enjoying the well-earned rest after striking fifties in both of India’s opening wins, but was happy to oblige. 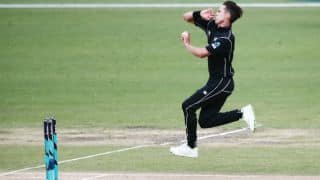