Smith was seen cheering for Federer even in last year's Australian Open.

It is not an unknown fact that Steven Smith is huge fan of Roger Federer. In fact, Smith in an interview with ESPNcricinfo last year, mentioned how the nuances of tennis have helped him better his cricketing career. He had said, I loved playing tennis and I still love tennis. I watch it quite a lot. Roger Federer is my favourite, which is pretty well documented, but I always loved playing growing up. It was a way to be competitive.

During the Round 4 of men’s singles in the ongoing Australia Open, Smith was found cheering for Federer at Rod Laver, again. Smith was not just happy to witness a game where Federer proceeded for the quarter-finals but also enjoyed a fanboy moment by being snapped with him post the match.

Great to see @rogerfederer again. Good luck for the remainder of the @AustralianOpen #champion pic.twitter.com/cId0hCpGzM

Smith was seen cheering for Federer even in last year’s Australian Open. Federer and Smith are on top in their respective fields currently. Smith was the highest run-scorer during the 2017-18 Ashes while Federer seems unstoppable in tennis. 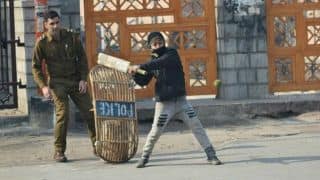