The first Test between India and Sri Lanka will be played on August 12.

Indian Test skipper Virat Kohli and teammate Harbhjan Singh was seen spending quality time with trainer Shankar Basu in the gym ahead of three-match Test series against Sri Lanka. The Board of Control for Cricket in India (BCCI) had decided to stick to their rule of not allowing wives and girlfriends (WAGs) to accompany the cricketers for the tour. “Most of the players on tour are just coming off a month-long break where they had enough time to spend with their families,” a BCCI official had said. The upcoming series will be a real test for Kohli and his men for the reason that they would be without a head coach and Team Director Ravis Shastri, who is busy in England covering the Ashes as a Television analyst for Sky Sports. READ– Virat Kohli: ‘You need a stronger bowling side to win Test matches’

BCCI tweeted a picture of Kohli and Singh during one of their gym sessions with the trainer.

In a recent press conference, the Delhi batsman said that he was not happy with the way they have executed plans because they have not been able to do what we wanted to do. READ: BCCI bans WAGs on India tour of Sri Lanka 2015

“When I said ‘We’, it includes me also. I think there is a massive difference. Cutting clips and copying and pasting done. Really it is not something I understand. I just mentioned it is something that any player playing in the team would feel that we have not been able to execute what we wanted to. So the whole idea is that as a cricketer I am very passionate about winning,” he said.

India might be into a trouble if Murali Vijay, who is suffering with a hamstring discomfort, fails to prove his fitness prior to the first game that will begin on August 12. READ: Virat Kohli confident of regaining form on India tour of Sri Lanka 2015 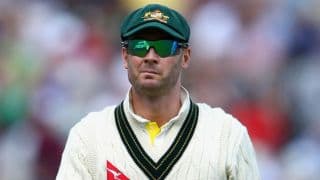 Dale Steyn 'completes" unfinished over in Test in Portugal!