MS Dhoni and family hosted Indian cricket fan Sudhir Gautam for lunch at their farmhouse. Gautam is one of Indian cricket and Sachin Tendulkar s biggest fans. Over the years, he has painted himself in tri-colours and travelled across the country on his bicycle to cheer for the nation.

Thanks to Tendulkar s support, Gautam could also be present in Australia and New Zealand for 2015 World Cup.

On Friday evening, Gautam was hosted for a lunch by Dhoni and his family. The cricket fan, who has become synonymous to Indian cricket posted on Twitter.

On Sunday, Dhoni led Chennai Super Kings (CSK) to their record third IPL title when they beat Sunrisers Hyderabad (SRH) at Wankhede Stadium, Mumbai. Dhoni will be next seen in action in Ireland when India arrive their to play a T20I series. 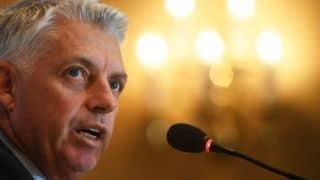 Ahead of India Test, Afghanistan gear up for Bangladesh challenge