This time, Piers Morgan seems to be in good mood as he replied to Virender Sehwag’s one of the tweets in a sarcastic way.

Renowned English journalist Piers Morgan has developed an uncanny knack of reacting to every tweet from former Indian cricketer Virender Sehwag on the micro blogging site. Morgan once again dragged Sehwag in to a conversation on Twitter and has garnered massive attention. Well, this time, Morgan seems to be in good mood as he replied to Sehwag’s one of the tweets in a sarcastic way. Sehwag is currently in England and played a charity match for Cricket United XI, which was led by Darren Sammy against Surrey All Stars at Lord’s. As Sehwag is known for his destructive batting, he was expected to do the same but was dismissed for zero.

Sehwag will be back in India soon and is expected to do the commentary during the second Test between India and New Zealand, which will be played at Eden Gardens, Kolkata. After playing the charity match, Sehwag visited the famous football club — Arsenal Football Club’s (AFC) dressing room and their home stadium. He posted a couple of pictures from his visit on Twitter. Morgan was probably quite excited after knowing about Sehwag’s visit to AFC and thought that the club need the services from Sehwag as he asked him to stay and come tomorrow again for the game.

Can you stay in there & play up front tomorrow? We need some explosive firepower. https://t.co/7SKvFjSkul

Both Sehwag and Morgan are famous for their funny Twitter banter and it all started during the Rio Olympics 2016. Seems like, they are slowly becoming among the most famous duo when it comes to Twitter banters. 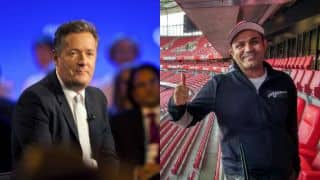