Mithali's omission from the playing eleven against England triggered a controversy and it intensified after India were handed an eight-wicket drubbing.

Committee of Administrators (CoA) member and former India captain Diana Edulji on Monday defended the exclusion of Mithali Raj from the Women’s World T20 semifinal, saying the team management’s decision cannot be questioned. Mithali’s omission from the playing eleven against England triggered a controversy and it intensified after India were handed an eight-wicket drubbing, shattering their dreams of a maiden ICC title.

“I think too much is being made out of it. The management (captain Harmanpreet Kaur, coach Ramesh Powar, vice captain Smriti Mandhana and selector Sudha Shah) made the decision of not changing a winning combination and that backfired. If India had won the game, I am sure nobody would have questioned their decision,” Edulji, a former India captain, told PTI.

“We can’t be questioning the team eleven. Another example is of Krunal Pandya, who was thrashed in the first T20 but bounced back strongly yesterday. These things happen in the game,” she said referring to the men’s team’s six-wicket win in the third T20I against Australia on Sunday.

Harmanpreet defended the decision to keep Mithali out of the eleven, saying “whatever we decided, we decided for the team”. However, she was slammed by the latter’s manager Annisha Gupta, who claimed that the 35-year-old was a victim of politics and favouritism.

“As I see it. It was just a bad day for India. The batting failed and when England were chasing, the dew made it tougher for the bowlers. The performance was unexpected, especially after the big win against Australia.

“I wish they had a bad game like that earlier in the competition and not in the all-important semifinal. The girls now have a New Zealand tour coming up, they must move on from this loss and work harder on their game,” she said.

Edulji also made it clear that no CoA meeting has been planned yet with captain Harmanpreet and Mithali. “It was a selection matter. There is no need for the CoA to intervene. If they want to have a word with us, then that can be looked at. We only step in when it is required, like it was when Tushar Arothe stepped down,” she said.

Arothe, the then coach, had to quit in July after he developed differences with the senior players over his training methods. Former India spinner Ramesh Powar was appointed full-time head coach in August and his term will end on November 30. 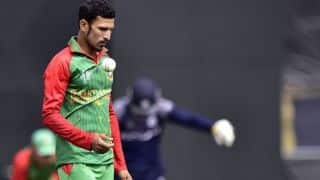