Players representing the senior national team before playing in the U-19 CWCs is not a new phenomenon.

[UAE]: Afghanistan’s Naveen-ul-Haq and Mujeeb Zadran have both talked about how their experience of playing for the senior team in the past will help in the upcoming 12th edition of the U-19 Cricket World Cup, which will be held in New Zealand from January 13 to February 3.

The presence of these two cricketers, who both have not only played for senior team in the past but are also among the players who will feature in the coveted tournament, will most likely to make Afghanistan a capable unit going into the U-19 Cricket World Cup.

“Playing for the senior team in the past will definitely help in the U-19 World Cup, especially in terms of handling pressure and being able to play more freely,” captain Naveen-ul-Haq said.

Echoing similar views, Zadran said, “It has been a helpful experience (having played senior international cricket) and will obviously help at the Under-19 level. There is obviously more pressure playing at the senior level but it is also great for gaining experience.”

It should be noted that Zadran recently became the first 21st-century born male cricketer to play international cricket, taking four for 24 on his ODI debut against Ireland in December 2017, the selection coming on the back of an exceptional show in the Asia Cup where he topped the bowling charts with 20 scalps to help Afghanistan clinch the title.

In fact, Rashid Khan, Afghanistan’s rising star, was also eligible for this edition. The leg-spinner has this accomplishment already, having made his senior debut in October 2015 before playing in the 2016 U19 CWC. Shabir Noori and Najibullah Zadran, members of the 2012 U19 CWC squads, are two other Afghanistan players in this exclusive club.

Apart from the Afghanistan pair, Ireland’s Joshua Little has also played international cricket – having turned out in two T20Is for his side.

Players representing the senior national team before playing in the U-19 CWCs is not a new phenomenon.

Earlier, India leg-spinner Narendra Hirwani went into the inaugural U19 CWC in Australia in 1988 after creating a Test record of 16 for 136 against the West Indies.

Pakistan’s Shakeel Khan also played in that tournament. The others from Pakistan to make similar entries include the youngest Test debutant Hasan Raza (1998 and 2000), Abdul Razzaq (1998) and Imran Nazir (2000). This time, spinner Shadab Khan was eligible for selection as per the age criteria.

Bangladesh’s Ranjan Das made his debut in the country’s inaugural Test match against India in November 2000. Mushfiqur Rahim, who made his debut at Lord’s in 2005 – Bangladesh’s first Test at the venue – is the only Test captain in the list.

There are three Canadian players in the list and Hong Kong’s Jamie Atkinson has built a strong reputation for himself. Kenya’s Thomas Odoyo made his debut against India in Cuttack in the 1996 World Cup before figuring in the 1998 U19 CWC. 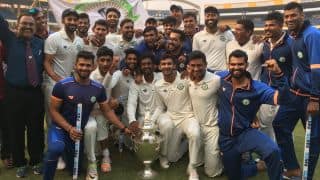