After being named captain Joe Root's deputy in Tests, Ben Stokes backed his skipper saying he is capable of handling the pressure.

After being named captain Joe Root‘s deputy in Tests, Ben Stokes backed his skipper saying he is capable of handling the pressure. Calling the news to be pleasing, Stokes said he felt honoured to be given such a responsibility. He also spoke about Root, who he thinks will be unaffected by the pressure of captaincy and will play his natural game despite the change. Following England s unsuccessful tour to India, then skipper Alastair Cook stepped down from captaincy, making way for Root to take the charge and according to Stokes, “Root is the right man to do it.” READ: Joe Root wants England to be a tough side; welcomes Ben Stokes as vice-captain

Stokes told BBC, Straussy [Andrew Strauss] told me [about vice-captaincy]. It was very pleasing to realise the accomplishments that I have managed to do on the field have now led me into sort of a leadership. It is a very good feeling that people who make the big decision, ECB and everything like that, they respect that and think that you are worthy of this vice-captaincy. It s a huge honour, I am really looking forward to go through all with Rooty [Joe Root]. I think he is going to do a great job. There have been a lot of people saying he shouldn t do it, he should concentrate on getting his runs but he is that group of a player that I don t think the pressure upon him won t affect his batting. Because once he is out there, he is Joe Root the batsman. Joe Root the captain will come when we are in the field and he has to start thinking about bowling changes and tactics of sort. Going back to the vice-captaincy, I am really looking forward to it.

When asked if he himself would have loved to captain the side, Stokes said, Yeah obviously. It is a job that you can never ever turn down. The highest rank next to playing for England is probably captaining England. But Rooty is the right man to do it. He has got respect from everyone in the changing room and all around the world for the batsman that he is. He has had the cricket mind ever since he was younger. We played together since we were kids, he just always had the cricket mind, you know, the badger as we call them. I think he will do a great job after what Cooky [Alastair Cook] has managed to leave behind him.

When further asked if Root will still have the cheekiness , Stokes agreed calling that a trait in his personality. I don t think him being a captain will change him as a person or as a bloke whatsoever. He will still be pulling pranks in the changing room and pulling Broady s [Stuart Broad] pants down when he has the opportunity. 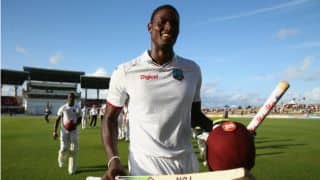