The International Chess Federation introduced an Olympic-style Torch Relay tradition for its Olympiad from this year's event.

New Delhi: Prime Minister Narendra Modi will launch the historic torch relay for the 44th Chess Olympiad on June 19, flagging off the relay at 5 PM from Indira Gandhi Stadium, Delhi. He will also address the gathering on the occasion.

FIDE President Arkady Dvorkovich will hand over the torch to PM Modi, who in turn will hand it over to Grandmaster Viswanathan Anand.

Starting from the national capital, the historic Olympiad Torch Relay will travel across the country (75 cities in 40 days) before reaching its destination-Mahabalipuram on July 27. Leh, Srinagar, Jaipur, Surat, Mumbai, Bhopal, Patna, Kolkata, Gangtok, Hyderabad, Bengaluru, Thrissur, Port Blair and Kanyakumari will be among the 75 cities.

The International Chess Federation (FIDE) introduced an Olympic-style Torch Relay tradition for its Olympiad from this year’s event and named India as the starting flame point for each edition, commemorating the popularity of chess in the country where the sport originated.

“I’m really excited to be part of this historic moment. I was always fascinated by the Olympic Torch Relay concept and now we also have one in chess. But the most amazing thing about it is, that it will always start from India. And as an Indian, I feel really proud about this fact,” said the five-time world champion Viswanathan Anand while addressing the media during a press conference in Delhi on Friday.

“Chess Olympiad Torch Relay is a great medium to popularise the sport in India. We have ensured that it visits and covers every corner of the country, inspiring many individuals. It will be a once-in-a-lifetime experience for everyone. I believe this will contribute immensely towards making India a global chess powerhouse,” Chauhan said.

“This Olympiad Torch Relay will add a golden chapter in Indian sporting history and, starting from India every edition, it will motivate generations to take up this sport. On behalf of the federation, we thank Honourable Prime Minister Modi ji for accepting our invitation. Events of such stature take a lot of effort and we are fortunate to have received the support from everyone including the government and other stakeholders,” AICF president Kapoor added.

The 44th edition of the world’s biggest chess event will be held in Mahabalipuram near Chennai from July 28 to August 10. In nearly 100 years of the history of the Chess Olympiad, it’s the first time that India will be hosting this prestigious event. 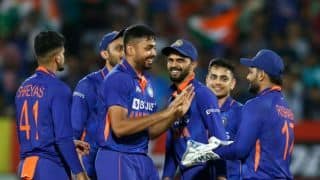 Clinical India Level Series With A Thumping Win Over SA