Cometh the hour, cometh the man. In the cauldron of a World Cup quarter-final against India, in India, Ricky Ponting applied himself immensely in conditions not entirely ideal for batting, handling the fast men and spinners with aplomb. 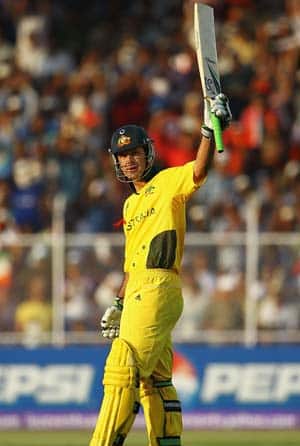 Cometh the hour, cometh the man. In the cauldron of a World Cup quarter-final against India, in India, Ricky Ponting applied himself immensely in conditions not entirely ideal for batting, handling the fast men and spinners with aplomb. Ponting was unstoppable as he compiled his 30th ODI century, and one that has set India a target of 261 to stay alive. India came back briefly through Zaheer Khan and Yuvraj Singh – easily the two best bowlers on view – but then David Hussey came along for a useful 55-run partnership.

Considering how poorly Ponting had batted throughout the tournament, this was an excellent innings. Walking to the middle after Ravichandran Ashwin bowled Shane Watson for 25 at the end of ten overs, Ponting began nervously and appeared very keen to get onto the front foot. Once he had a measure of the surface and the hands weren t going hard at the ball, Ponting was shuffling about his crease looking to offset the bowlers.

Brad Haddin was content to be the aggressor in a 70-run partnership with Ponting. He frustrated India with brave steers off the fast bowlers and controlled chips over the infield, but fell looking to go inside-out off Yuvraj. Quite typically, Ponting controlled the middle stages of the game, nudging singles, running hard, keeping the scorecard and the strike rotating, and nursing himself back into form and confidence. Ponting has been in wretched form of late but to his credit, eschewed the risks till the last stages of the game.

There was nothing flamboyant or hazardous. There was the odd lunge forward, as is Ponting s preference, but he wasn t here to worry about looking pretty. This was a man who had lifted the World Cup three times and he wasn t about to go down without a fight. He chose the deliveries and bowlers to hit and hardly made a false move in 118 deliveries.

MS Dhoni allowed Ponting many risk-free runs, especially with the field spread and no slip in place. As Ponting ticked along it became evident how desperate Dhoni was to get wickets, and his frustration gave way to Sachin Tendulkar being given the ball. However, it was conventional thinking which delivered India the wickets. Yuvraj, India s best spinner in the tournament, was recalled and drew Michael Clarke into a silly shot, while Zaheer bowled Michael Hussey with a superb slower ball immediately on return.

By this time Ponting had collected 56, and was settled enough to sweep and loft the spinners. Forty runs were added with Cameron White who fell immediately upon Zaheer s return for a third spell, chipping a return catch to the bowler. However, Zaheer wasn t as tidy in this burst and David Hussey picked off free runs down the leg side.

That gave David Hussey the momentum he needed to launch a busy innings. The batting Powerplay yielded 44 and there wasn t relief until Ponting reverse-swept Ashwin to short third man. Despite their strong batting line-up, India will feel nervous chasing this total.