India Women were wobbling at 113 for 7 at one stage in the first ODI once Shikha Pandey was scalped for 2. India had entered the match without Mithali Raj who was unwell. Yet, the lower middle-order saw India put up a competitive total of 200 on board. Pooja Vastrakar (51) and Sushma Verma (41) under pressure resisted Australia Women, taking India past imminent danger. They added 76 as both registered career-best scores, Pooja notching up her maiden fifty. For Australia, Jess Jonassen and Amanda Wellington were wreckers-in-chief ending with figures of 4 for 30 and 3 for 34 respectively.

Electing to bat, India Women were off to a blazing start with Smriti and Punam scoring boundaries at will. Megan Schutt and Ellyse Perry started off with a few loose deliveries that prompted the Indian openers to go all out. The openers swapped roles: while Punam went all guns blazing, Smriti played the second fiddle. The Australian fielding looked sloppy in the beginning, from misfields to a dropped chance of Smriti.

The duo stitched 38 runs together before Ashleigh Gardner handed Australia their first breakthrough. A rash shot from Smriti saw Meg Lanning take a comfortable catch at mid-on. Debutant Jemimah Rodrigues, replacement for Mithali, joined Punam. Their partnership in the Challengers Trophy had helped India Green reach the final. However, this time they were beaten by the Australian bowlers. Jemimah started off her ODI career with just a run. She was strangled down leg by Wellington.

Punam looked on course to her fifty until she was trapped by Wellington s spin as well. Her 50-ball 37 included 6 fours and a six. Deepti Sharma carried the momentum forward, hitting boundaries at will.

Meg juggled her bowlers at regular intervals. Jess and Megan removed the set batters, Harmanpreet Kaur and Deepti, in quick succession. India were tottering at 88 for 5 then.

Veda Krishnamurthy entered with a hope to keep India s scoreboard ticking, but handed Wellington her third wicket after an 19-ball 16. 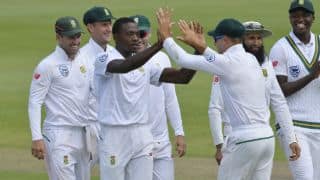