Marsh, who has played 28 Test matches, was sidelined in April after undergoing ankle surgery after the controversial tour of South Africa.

Australia allrounder Mitchell Marsh is on the verge of resuming bowling in match conditions, which will come as a boost ahead of the Test series with Pakistan in the UAE.

Currently in Bengaluru as captain of the Australia A team that plays the first of two four-day games with India A from Sunday, Marsh said he was confident of rolling his arm over after a five-month injury-enforced break.

“I am going really well at the moment. I am back bowling pretty much at full tilt now … hopefully, I will bowl a few overs in the second four-day game here, said the 26-year-old. But it’s all progressing well. I have had no real setbacks through the whole injury process. I am really rapt.

Marsh, who has taken 22 wickets from 28 Test matches for Australia, was sidelined in April after undergoing ankle surgery after the controversial tour of South Africa, which meant he head to withdraw from his deal with English club Surrey. Having risen in stature with two Test centuries during the Ashes at home, Marsh faced a setback with his ankle problems exacerbated. Recovery from surgery saw him miss Australia s limited-overs tour of Ireland and England in June.

Back in the saddle as Australia A skipper, March was ready to get into the thick of things against India A. “I have had my fair share of injuries to come back from. I guess in that scenario you lean on your past experiences. It’s been a long lay off, five months. Fortunately for Australia, we haven’t had that much cricket, compared to what we usually have, so I haven’t missed a lot of cricket. I am really rapt to be back now and can’t wait to get stuck into, he said.

Marsh, who captains Western Australia in domestic cricket, has been tipped to become Australia s Test vice-captain by Adam Gilchrist and Ian Chappell, with David Warner serving a 12-month ban. Reports suggest that Marsh and Aaron Finch are the top contenders for the captaincy, and there is the vacancy of a deputy to Tim Paine for the UAE tour.

“I have had a little bit of experience captaining Western Australia … it’s not something I tend to think about too deeply but I think if the opportunity arose I would grab it with both hands,” he said. “Ultimately, that is out of my hands at the moment. I just want to be the best captain I can be here. I am really looking forward to captaining in these conditions which is something I don’t experience much playing at the WACA every second week and in Australia.” India vs England 2018, 4th Test, Day 3 LIVE Streaming: Teams, Time in IST and where to watch on TV and Online in India 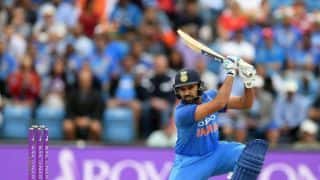