The last date for applying for the position of Indian cricket team’s head coach was June 10.

Former domestic stalwarts Pravin Amre and Surendra Bhave become the recent candidates who have applied for the post for India’s national coach. The last date for applying for the position of Indian cricket team’s head coach was June 10 and now the Board of Control for Cricket in India (BCCI) will scan the applications to select the man for the job. There were reports circling about former Australian cricketer Jason Gillespie also having applied for the post. However, Gillespie took to social media and clarified that he has not applied. Meanwhile, reports also suggested that Stuart Law, another former Australian cricketer had applied for the job. Also, former India fast bowler Venkatesh Prasad had mailed his application to the BCCI. READ: Pravin Amre believes coaches should not mess with players’ original strengths

According to The Hindu, the duo of Amre and Bhave confirmed that they have submitted their applications to BCCI on Thursday. Amre, who played 11 Tests and 37 One Day Internationals (ODIs) for India, has coached the Mumbai domestic side to three Ranji Trophy titles. He has also been at the helm of the India-A side which dished out decent performances in the past.

Amre is famous for his personal coaching for a number of cricketers including the likes of Robin Uthappa and Dinesh Karthik. He helped them to find out the flaws in their respective techniques and rectify them with his guidance. Uthappa worked extensively with the former cricketer to remodel his game and he eventually was benefited as well as he unleashed some wonderful batting performances in the domestic cricket and especially in the Indian Premier League.

Amre for a very long time has been the go-to-man for many young Indian cricketers, especially for a help in batting He has helped the likes of Ajinkya Rahane. Suresh Raina, and Naman Ojha as well and Amre can be the man India is looking for to solve their batting woes overseas.

On the other hand, talking about Bhave, he served as India’s national selector between Trophy in 2013-14. He is someone who knows the Indian cricket well and for the last two years, he has been working with the Haryana side. 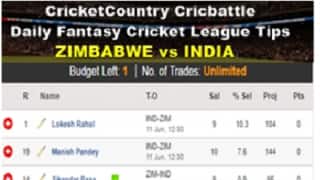